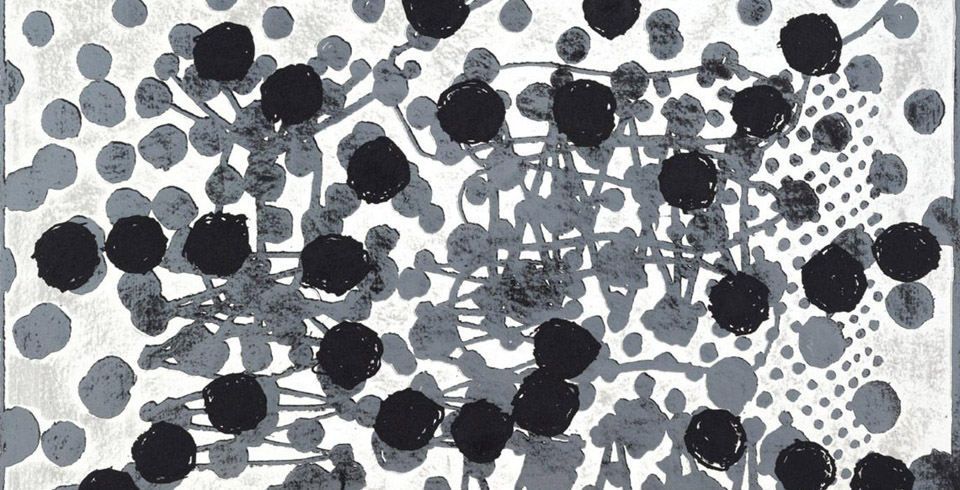 “…these  marks are in constant motion, swarming over the surface the moment we look away and then, the moment we look back, returning to their rightful places, the positions in which we initially found them: the places in which they belong. […] They create an odd synesthesia, they make us hear sounds, music – the way the paintings of Arthur Dove can seem to make us hear a foghorn… ”

The unanticipated way in which an artist thinks about music…

These new silkscreens by the American artist Terry Winters were the focus of Two Palms booth at The Armory Show this year. The 12 large scale vertical prints with a restricted palette of black, silver and white were inspired by Georgy Ligeti’s 1961 composition Atmospheres.

The title of the series comes from a 1961 symphonic work by the Hungarian composer György Ligeti that exemplifies his concept of ‘supersaturated polyphony.’ What this signified for Ligeti was a canonic structure so intensive that it resists penetration, as he once observed, “like a densely woven cobweb.”*

The artist’s prints from 1999 – 2014 are currently the subject of a solo exhibition at Munich’s Pinakothek der Moderne and an in-depth exhibition catalogue from Prestel Publishing that contains a forward by Sharon Corwin, Carolyn Muzzy Director ad Chief Curator at Colby College Museum of Art and Michael Semff, Senior Director at Staatliche Graphische Sammlung München as well as articles by Francine Prose and Michael Semff. In the book you will find 70 images and a great deal of information about the various subjects, techniques, narratives and in prints featured in the Munich exhibition.

Evelyn Day Lasry, Founder Two Palms Gallery: This is a new set of 12 large-scale silkscreens by the American artist Terry Winters. These are newly published pieces from 2014 – 2015 and they are a part of an exhibition in Munich right now.

The show is Terry Winters: Prints 1999 – 2014 and this series here are his newest prints and they are at the start of that exhibition in Munich. The images are inspired by Hungarian composer György Ligeti, and the complexity of the image relates to the density of the music. Think of them as cobwebs and multi-layered images. 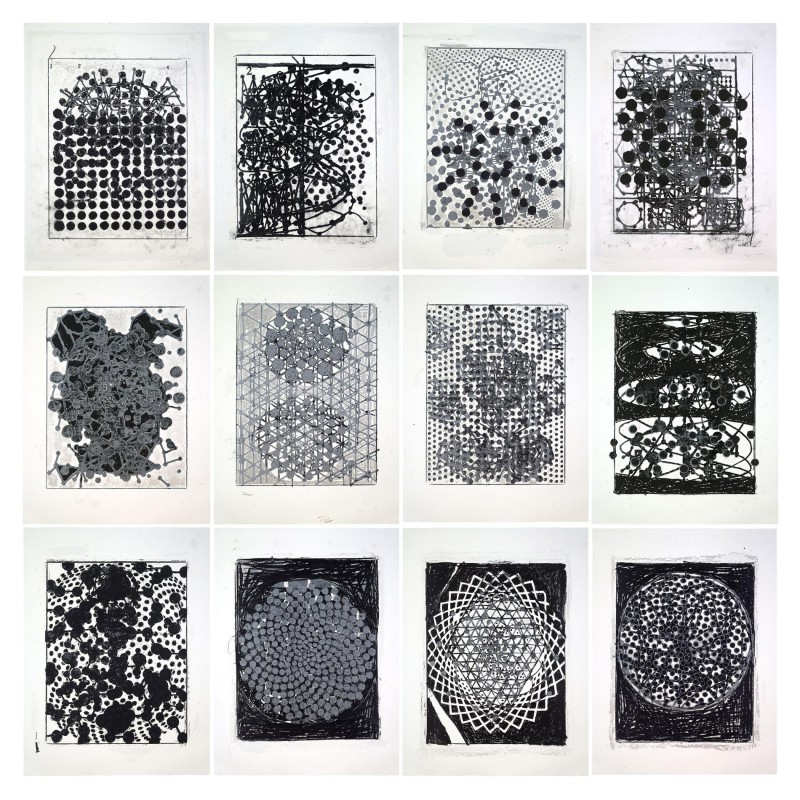 He brought his sketchbooks to his studio, the printmaking studio to inspire him. 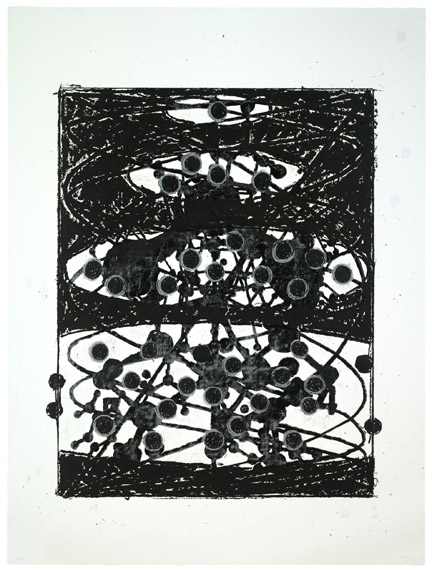 The first step is painting on a large piece of Mylar, the scale of this piece of paper and he would use an oil stick or a paintbrush to paint an image on the Mylar. That first image went into the silkscreen exposure room, was shot onto a screen with photosensitive emulsion and then that became the first layer on the paper. Once it’s printed he may decide to build up that layer and print that one screen multiple times, but then he takes another piece of Mylar and based on the image on the paper makes a new layer to this image. So this is a call-and-response process.

This piece behind me, Atmospheres 8, went through the press 38 times, so it’s a multi-layered process that’s built along the way. His oil on canvas pieces are beautiful, colorful abstractions, he is also known as a colorist and because his pieces are so complex, he wanted to get rid of the color. There are 3 colors: black, white and metallic gray.

The artist is also inspired by images from nature, molecular structures, close up images of cobwebs or honeycombs or pollen. That can explain some of the imagery you see in these prints.

Artwork featured in this article: