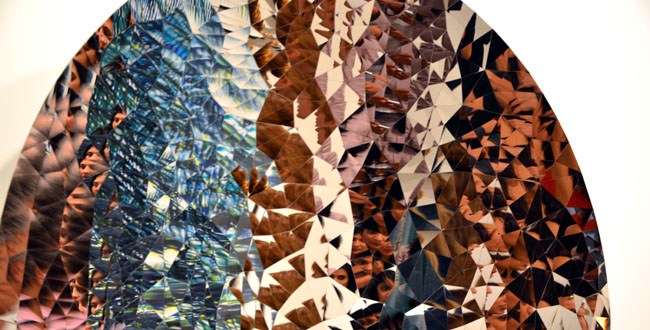 Day 1 of 2. Impressions of an Art Basel Miami Beach virgin.

It’s the time of the year when the art glitterati descends to the sun and sands of Miami Beach. There is a scent in the air – that of art, that of money, that of composed and elegant eagerness to explore the top quality art on display. Let’s put things in perspective. It is the 11th edition of the art fair at Miami, and this year, there are more than 260 exhibitors taking part in this social melting pot. Making her way through this pulsing energy, Kelly Caldwell explores Art Basel Miami Beach 2012 – observing discovering, gasping and learning – all at the same time.

It’s Wednesday morning in Miami and the crowd begins to gather around the Miami Beach convention center. I flashed my press pass and stepped into a different dimension – different, at least for me.  This was my first Art Basel Miami Beach experience – the pre-opening VIP day, and I was totally underdressed.

I am an art enthusiast, which is to say that I love art but I am, as I discovered, completely illiterate when it comes to contemporary art.  “Art enthusiasts” did not attend this VIP event – today’s attendees were serious collectors on a mission. Never have I seen so many thin, beautiful, solemn people impeccably dressed in high-end designer clothes. Never had I had such a compulsion to eavesdrop on the many hushed conversations occurring in every language. If I were honest, the people were more captivating than the art. One out of every four women, it seemed, was carrying the same Celine leather handbag (retail: $3,250/purse) – we counted 30 in a four-hour period.

Works from the masters like Chagall, Picasso, Legér, Botero, Kandinsky, Le Corbusier, Calder and Brancusi were easily recognizable, but I will admit, I had no idea who were the other 98%. Though I have purchased a house worth of art from all over the world, my art education clearly ended with the college humanities classes – I buy what moves me without regard for its appreciative value.

Following galleryIntell’s founder, Kristina Nazarevskaia around the show was like trying to follow a Tomahawk missile when you yourself do not have a GPS.  She moved like a gust of wind through the aisles commenting to Ramandeep Kaur, a co-founder of galleryIntell, about an artist or pointing out a reference that a given painting made to a major work or an artistic technique. I kept close, eagerly soaking in every word.

Stopping seemingly at random, with butterfly lightness, we admired the Gerhard Richter paintings, the Yayoi Kusama, the Georg Baselitz, and Zhang Ituan. Soon I began to recognize the names and styles of the standouts. Delighted – did not come close to describing the feeling when I came upon a series of four Georg Baselitz hand-colored lithographs that were completely uncharacteristic in style. Kristina and Ramandeep were taken with them. I felt quite proud of my accidental ‘find’.

Contemporary art is demanding. To understand a piece, you have to be willing to explore political, historical or even metaphysical references. You must dig deep to free yourself of common associations. Unlike the gallery representatives and attendees of this VIP showing, contemporary art is not about beauty or aesthetics. Had I been on my own at this show, I would have found the tense atmosphere of gallery sales and fashionista competition to be truly overwhelming. The opportunity to see the Miami art fair through the eyes of an artist, an art historian and a true connoisseur of artistic technique and human expression was one of the most exhilarating learning experiences I have ever encountered.

Before the afternoon drew to a close I realized that I recognized a sculpture by Anish Kapoor, the Indian born British artist whose large – scale public works have brought millions to contemplate art on a deeper level. I remember reveling in the visual mystery of his enormous, blood red, skin like PVC installation at the Tate Modern’s Turbine Hall in 2003.  Three years later his reflective concave disk or “Sky Mirror”, was installed at the Rockefeller Center in New York. Here at Art Basel Miami Beach, I could buy one such disc in gold (smaller, of course) for about $1.6 million or an alabaster sculpture for around $1.4 million. These works are captivating in their simplicity and sophistication…

So, I’m off to Art Miami to see just how far my money will go! Follow me!