The invitational art fair will reprise itself in its new location in SoHo at 82 Mercer street. The old industrial framework with exposed brick walls and high ceilings seem like a more natural environment for any art fair, and VOLTANY galleries and visitors seem quite at home in SoHo. Last year we were thrilled with the level and quality of the artists galleries selected for their booths. As you may know, VOLTA’s concept allows for a gallery to feature a single artist in their booth which is super beneficial to the visitors who are spared the chose of having to re-focus their attention every two seconds. Here you get a chance to see several works by the same artist, understand a fuller range of their work and get to know the thought behind a series and ultimately have more to choose from. So everybody wins in the end.

As you meander the booths, discovering new names, pay special attention to these artists:

Ala Ebtekar (on the image Coelestis) 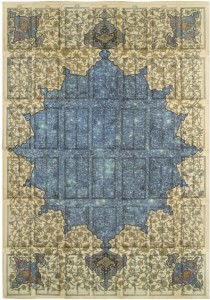 This is a Los Angeles- based gallery. “The book pages adhered to the canvas are 150 years old, they feature the poetry of Hafez, the seminal Persian poet from the 14th century (AD/CE). In Persian culture Hafez’s verse is used in ways similar to that of the I Ching, for advice and foretelling, which Ala alludes to with his white stars highlighting areas of the text (you open Hafez to a random passage and it informs the question you have). Adhering the book pages to the canvas happened first, then Ala un-stretched the piece and executed an archival pigment print over the surface of the book pages – the blue galactic scene in the shape of the star. The uptown description of this process is “digital chine-colle”. Then Ala went to work with shell gold for the garlands and watercolor for the patterns in the corners of the piece, and at top and bottom. Layers upon layers, referencing Ala’s time in Tim Rollins and K.O.S. as a young artist.” – Charlie James Gallery 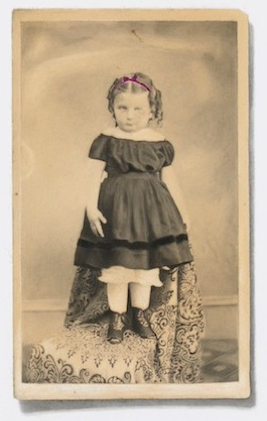 Let’s start by saying that these are NOT photographs. We’ll let you contemplate that for just a second, examine the image closer and try to come up with an alternate technique. Now, if you guessed these are pencil and watercolor drawings you were correct.

“Without relying on magnifier or other devices, he closely observes every physical detail, including particles, fibers, and even small dusts with his naked eyes and depicts them with extremely meticulous strokes… So far, the entire works he has exhibited barely amount to twenty-some. In addition to 2011’s “Re:view” series featuring portraitures of old photographs in an attempt to grasp today’s realism, he published in 2012 a new, ongoing series titled as “Where the artificial stops and the real starts” at a large scale, in which he displays many old postcards in orderly manner and hides only one real (original) painting among other pictures.” – Gallery Kogure 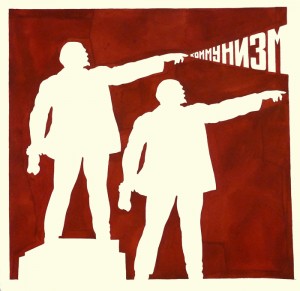 Some of you may remember the colorful propaganda posters from the bygone decades. Well, I do. Bold block letters, rich saturated reds and blacks, direct imagery and Lenin’s capped head everywhere. But it feels like enough time has passed and we can look at these images through a different kaleidoscope. Akhunov’s work is remarkable because of the time when he created these images. In the 70’s, the decade when these were executed, his work would have been considered scandalous, treasonous and grounds for all kinds of formal and political persecution.

” From a peripheral position in Tashkent, his artistic production is connected to the experience of 1970s Moscow Conceptualism.
Akhunov uses the typical iconography of the Socialist propaganda of the Soviet period subverting the dominant ideology through the manipulation of propagandistic images. His so-called art-chive establishes a social critique peculiar to the Soviet reality. In the 70’s the artist wrote several essays on his art, defined by himself as ‘social-modernism’. 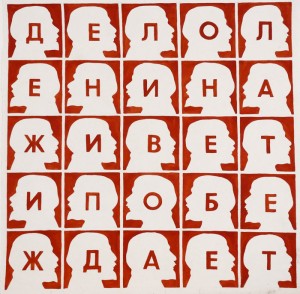 From 1974 to 1987 Akhunov realized a series of projects dedicated to the famous revolutionary leader Lenin, including the wide serie of drawings and collage Red Line, in which the Lenin’s representations are inserted into minimal drawings, creating an imaginary ‘political’ landscape.

Akhunov criticized the system, for example, digging out skeletons from public institutions as in Art-Cheology, 1975-86, or placing monumental sculptures of letters  in a restricted exhibiting space creating an effect of suffocation,  as in Breathe Quietly, 1976-2013, the monumental installation already exhibited last  year in Italy during the 55th Venice Biennale.” – Laura Bulian Gallery

This last work now feels imbued with a tremendous sense of irony. Something, I am sure, Akhunov never fathomed at the time of its creation. 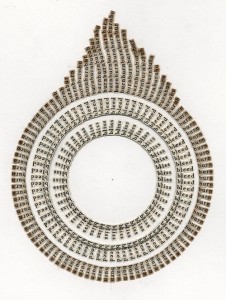 This is a Brooklyn – based gallery focused on emerging artists. As soon as I saw Meg Hitchcock’s word sculptures my OCD took over and I was promptly swimming in the mandala-like shapes of her work. They are serenely simple, beautiful, elegant and somehow fragile. The word – the only pre-existing graphic element of her medium works as the structural framework for the final shapes to mold around.

“Hitchcock meticulously removes and reforms the letters from one sacred text to manifest another of ideological significance. The letters are often set in precise bas-relief stacks or as streams of contiguous text in meandering type. Like the circuitous floor maze of Chartres cathedral, Hitchcock’s line acts as a path towards a centre, which stands independent of understanding text. 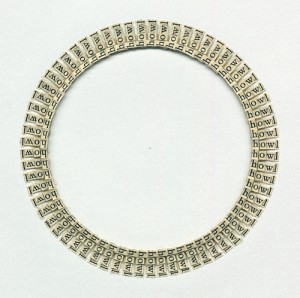 In Amazing Grace (2013), Hitchcock cuts letters from the Bhagavad Gita to recreate the popular Christian hymn. The hymn is dissected and arranged around a circle, creating a baroque mandala that alludes to the rose windows of Christian cathedrals. It is interrupted by the Sanskrit mantra OM TAT SAT, a reference to the sacred text of Hinduism (the Bhagavad Gita). Trimalchio’s Feast: The Declaration of Independence, 2013 is comprised of letters cut from the Satyricon by Petronius; a Latin work of fiction that satirizes the lower classes of the Roman Empire. Like Rome, America is built upon lofty principles that have eroded over time. This free-standing piece is an unfurled scroll weighted at both ends with cutlery as if for a feast of words in a glass vitrine. In contradistinction to the austerity of Trimalchio’s Feast is the large, stylized work titled Branch, (Isaiah, Chapter 11), 2013. Here the form of the reaching branch is braided with the content of Isaiah and with the mystical meaning of the Kabbalah, from whence the letters were cut.” – Studio 10

Keep in mind that artists first began to use the graphical elements of words at the turn of the 20th century. Surrealists, like Guillaume Apollinaire famously created calligrammes using words to illustrate the very theme of the poem. El Lissitzky, Nikolai Suetin, Vladimir Mayakovsky and Kazemir Malevich also used letters as principal graphic elements in their art.

Continuing the theme of words and language… We’ve already had the pleasure of including this Philadelphia-based gallery in our recommendations in 2012. Two years ago we picked Mark Khaisman‘s amazing tape art paintings and this year we selected Simeen Farhat’s semiotic sculptures. Farhat’s words made me think of that moment of wanting desperately to say something and getting entangled by the very words. The selective transparency of letters perhaps implies gravity of each word as perceived by its holder and then the receiver. 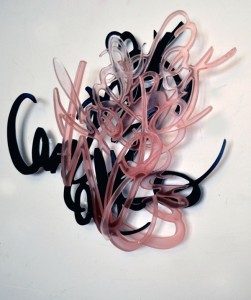 ” Words — written or spoken, understood or misunderstood, poetic or prosaic, curvilinear or rectilinear, on the computer screen, or on paper — are what motivate me to create my visual narrative. I am fascinated by how, through language, we understand a great deal about ourselves and things around us, and how ideas: simple, complex and abstract, are conveyed and understood using symbols. Another aspect that also intrigues and inspires me to use language as a vehicle for my art is the endless possibilities through interchanging letters, words and phrases; to express thoughts, ideas and concepts. Lastly, it is also very important for me to express these ideas from my perspective as a woman. 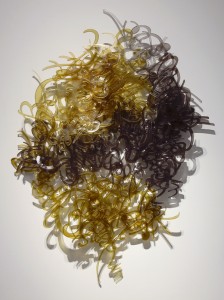 Just as a literary piece is convincing when there is congruity and flow in the writing — along with interesting ideas — visual works of art, for me, become more engaging when they have a nice balance, rhythm and direction, along with a sincere thought process. This is how I relate my formal compositions with that of the literal and lyrical writings — rearranged and restructured symbols, as purely lines and shapes. As a visual artist, I do not follow the rules of any language; my intention is to reconstruct the thought process.Therefore, the text — whether they are borrowed from works of great poets and philosophers or just from a common phrase — become self-contained and dynamic visual objects. Although viewers may recognize familiar letters, words, or symbols from a particular language, however, the words in those artworks become indecipherable. My objective in choosing those words is to show the essence of their message through abstraction; by using overlapping shapes and lines which create tension and movement and stir up emotions.” – Simeen Farhat

This article ©galleryIntell. Image © their respective owners. Images provided courtesy of the galleries and artists. For a complete list of artworks featured in this article please contact press@galleryIntell