7 masterpieces to buy at the January 2014 Old Masters auctions

The Old Masters remain an important focus segment of the American, European and Asian art collectors. Each year the number of exceptional available works keeps diminishing, as most of the examples enter museum collections and are highly unlikely to be deaccessioned for generations to come. And as more museums open up, the demand for high quality, rare works by Goya, van Dyck, Turner and others will only increase. So, here is a list of 7 works all under $1 million that we recommend for any serious and beginner collector. 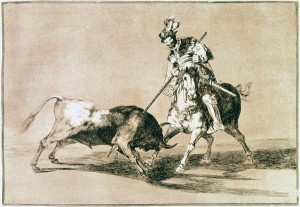 La Tauromaquia is a set of 33 aquatint etchings that focus on the drama of bullfighting – the integral part of Spanish society throughout its history. This set comes from the first edition, meaning that the spatial effect of the beautifully modulated aquatint in dark brownish black ink is exceptional. The series were printed and published in 1816 by Goya himself, who was one of the greatest printmakers of all time. From Christie’s lot notes: “To a certain extent, through the violent combat of man and beast, Goya transposes his feelings toward the Franco-Spanish War, whose atrocities he had condemned so vividly in Los Desastres de la Guerra only shortly before.” This outstanding work in remarkably good condition is estimated to sell between $450,000 − 650,000. | Christie’s 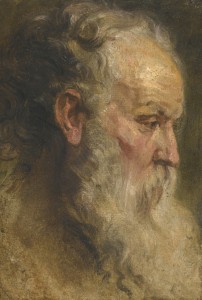 A Flemish Baroque artist Anthony van Dyck painted this oil on paper study while he was working in Ruben’s studio between 1618 – 1620. The grey-bearded man depicted here in profile appears in other works by the artist, primarily with a biblical subject. It’s likely that van Dyck reused this head study in larger compositions by modifying vantage points, which is not uncommon among artists working with figurative compositions. This painting comes from a private European collection and is estimated to sell between $250,000 – 300,000. | Sotheby’s

An Italian Renaissance painter Biago D’Antonio depicted a handsome boy dressed according to the late-15th century Florentine fashion. For some time the present painting was attributed to Sandro Botticheli, d’Antonio’s contemporary, with whom the artist worked side by side on frescoes in Sistine chapel in Vatican. This oil on panel portrait, although undated, is attributed to d’Antonio’s middle period and is estimated to sell at $200,000 – 300,000.  | Christie’s

Robert Home – Portrait of a Lady as the Cumaean Sibyl 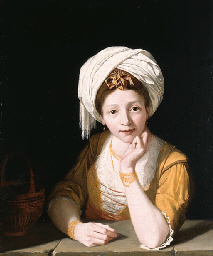 Oil on canvas, circa 1778 − 1779. This is a neoclassical portrait of the Countess of Coventry and depicts her as the Cumaean Sibyl, a prophetess in Greek and Roman mythology, or a priestess presiding over the Apollonian oracle at Cumae, a Greek colony located near Naples, Italy. The Cumaean Sibyl has been portrayed throughout the history of western civilization and each time she is represented through a different cultural lens depending on the era. In this particular portrait Home portrayed her as a young girl, with insightful eyes and kind smile, her head wrapped in a voluminous, eastern style cloth headdress, her face pale. This early and rare work by the British court painter Robert Home is expected to sell between the very reasonable $40,000 – 60,000. | Christie’s

Oil on panel, circa 1807 – 1808. One of the most famous British landscape painters, also considered to be one of the founders of abstraction, William Turner depicted Newark Abbey numerous times in both works on paper and in oil, all the while exploring and refining compositions. The present painting captures a southern view of a ruined monastery standing in the river landscape. Turner, famous for his rendering of light in painting, skillfully constructed this landscape with minimum detail. The painting is estimated at $300,000 – 500,000. | Christie’s

Giovanni Domenico Tiepolo – Incontro al Molo: A ‘Codega’ Showing the Way to a Noble Couple on a Molo 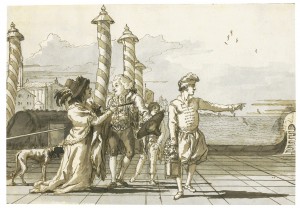 Pen and brown ink, brown and gray wash over traces of black chalk, 1791. One of the finest Venetian drawings that appeared on the market in a generation. This superbly preserved work represents a delightful scene from the 18th century Venetian daily life. It is possible that Tiepolo made this original drawing for his personal amusement. This highly finished and elaborate work is estimated at $600,000 – 800,000.  | Sotheby’s

Works featured in this article will be offered at Christie’s and Sotheby’s in New York on January 29 at 10 am. Please check with the appropriate auction house for exact times of the sale.