We’re going to say that this was the most important art news of the year. Not only because of the sheer number of art works involved (according to the press, the number stands around 1500 works of art, albeit some other sources place the number closer to 1400), but also because of the art historical importance of those works, many of which were thought to have been lost during or immediately after WWII.  What makes this whole sensation even more interesting is that the 84-year old man behind the headlines is not your typical WWII art loot villain. The article in Spiegel, which should have been awarded just as much attention as all of the other flat sensationalist reports, paints a much more human, much more real story of the infantile, weak, frightened and limited personage that is Cornelius Gurlitt. 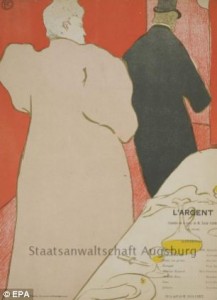 The discovery prompted this comment from Ruediger Mahlo, representative of the Conference on Jewish Material Claims against Germany. “To stand in front of these works, which have for a long time been thought missing, lost or destroyed and to see them in a relatively good condition — in part a little dirty, but not damaged — gives one a somewhat eerie feeling of happiness.”

The chief prosecutor in the southern city of Augsburg, who is investigating 80-year-old Cornelius Gurlitt on charges including tax evasion, acknowledged that some of the more than 1,400 works confiscated from his home in February 2012 clearly belonged to him. More than 400 of the paintings could be returned to Gurlitt. Here is an interesting article in Deutsche Welle we recommend reading.

The winner takes it all – Tobias Meyer resigned from Sotheby’s 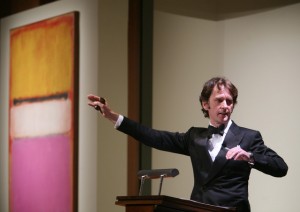 For many not privy to the inner workings of the often elite world of the NY auctions, Tobias Meyer, 50 was the face they’d see in the news twice a year, usually upon the setting of yet another record in the Post-War and Contemporary art auctions. For the insiders, Meyer was really the face of success at a world-class organization, an icon admired for his keen business sense as much as for his sense of humor and his ability to make really wealthy people pay obscene amounts of money for beautiful things. So when news of his resignation broke on November 22nd of this year, many reacted with shock and disbelief. Nonetheless, the reasons were obvious – Christie’s managed to secure more prominent lots for their spring and fall auctions and broke two records in a row, earning almost $700 million during the November Post-War and Contemporary sale alone. Meyer, former worldwide head of Contemporary Art department at Sotheby’s, was defeated in this escalating race that more and more resembles a balloon-blowing competition and, pressured by the investors of the publicly traded Sotheby’s, stepped down from his post. Subsequently Sotheby’s announced that it had no plans to fill the post and, to make matters even stickier, people familiar with the situation expect further resignations from Bill Ruprecht’s. Time will tell.

The year started with a bang for Christie’s.  First the record sale in May that totaled some $495 million and then the Francis Bacon sale in November that was splashed all over the news for setting a new record for the most expensive painting sold at a public auction. For the sake of accuracy – Francis Bacon’s Three Studies of Lucian Freud was a triptych, so technically it’s three paintings sold as one. The Bacon triptych brought a somewhat abstract $142 million and the total for the evening tallied at $691 million. What happens now will be interesting to see, as Sotheby’s is now forced to shake up its existing departments and put their consignment securing efforts into turbo drive. 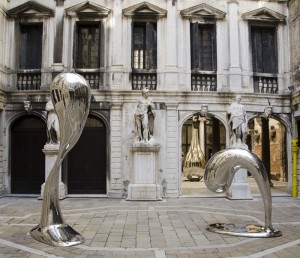 This year’s Biennale in Venice took over the entire city, spreading to all its neighborhoods and taking over private homes, stores and palazzos. The main exhibition space at the Arsenale and the Giardini seemed an endless succession of one video installation after another. In fact by the middle of the exhibition some of the visitors who were not prepared for the sheer size of the Arsenale exhibit were no longer looking at the art but rather for a way to escape the building. The rest of the crowd snaked through the pavilion absorbing the flood of visual stimuli in every medium, shape, form, language and size. Some of the individual international pavilions brought noteworthy installations, while some missed the point of an exhibition altogether, showcasing mediocre amateur attempts that looked more like poorly developed and executed imitations of someone else’s bad ideas. (Yes, Azerbaijan Pavilion, I am looking at you).  Argentina’s pavilion was a welcome exception, as was Ireland’s exhibit featuring Richard Mosse. Lithuania, Italy also brought interesting stories, worth exploring as did Germany and Iceland. All in all it seemed that the adolescent desire to resort to “shocking “with explicit sexual or violent imagery is subsiding throughout the contemporary art scene. Here is hoping to more mature dialogues for the next round two years from now.

Hillel “Helly” Nahmad, the boy-wonder of the global art world with a Forbes estimated worth of $1.75bn landed in the middle of a criminal case earlier this year. After the shock of the Knoedler Gallery closing and accusations of the gallery selling fakes to some of the world’s top collectors, it was almost assumed that the FBI agents swarming the NY gallery in April would hand down a similar indictment. But Helly Nahmad, the 34-year old heir of the Nahmad art dynasty and proprietor of the Helly Nahmad Gallery on Madison Avenue was one of the many defenders in a criminal gambling case brought forth by the US federal prosecutors. Then in a surprise move, right in the middle of the fall contemporary auctions, Nahmad pleaded guilty in a Manhattan federal court to operating a gambling business and agreed to forfeit $6,427,000 and the Raoul Dufy painting Carnaval à Nice, 1937 worth hundreds of thousands of dollars. Under a plea bargain with prosecutors that saw other charges dropped, Nahmad faces up to five years in prison, rather than 92 years he previously faced on charges of money laundering, racketeering, conspiracy and other crimes. Salander-O’Reilly, Knoedler…this begs the question – who is next? 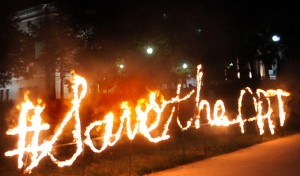 This is a scandal that managed to involve a major US art institution without the art institution instigating it. The city of Detroit’s ill managed public budget forced the municipal government to file for bankruptcy thus causing the dominoes to tip. One of those dominoes is the major public art museum with a substantial art collection that is now being appraised by Christie’s. Is there a major auction in the cards for the museum? Things haven’t gotten to that point just yet, but speculations never needed facts to proliferate, did they?  In the meantime, the New York Times announced that Christie’s appraisers estimated that if sold, a small portion of the museum’s collection would be worth somewhere between $452 million and $866 million. The estimate covers less than 5% of roughly 66,000 works in the museum’s collection, while The Detroit Free Press, hired by the creditors to conduct a quick, unofficial appraisal had said that 38 of the museum’s masterpieces alone would be worth at least $2.5 billion in the current art market. To put things into perspective, Christie’s examination was limited to works that were bought entirely or in part with city funds, because those works could be sold more easily than donated works, for example, whose sale could generate legal challenges.  It’s a shame that the city’s art collection is even considered for liquidation. We’ll leave it at that.