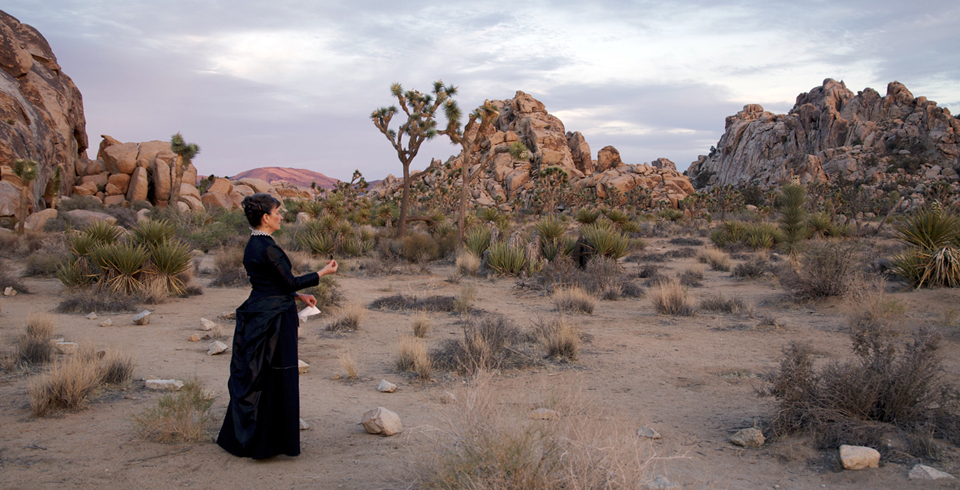 Contemporary art at the new frontier

BoxoPROJECTS is dedicated to contemporary art at the new frontier – not only a geographic frontier, but also the frontier of making, selling and experiencing art. The BoxoHOUSE artist residency is located in Joshua Tree, CA, a fabled place of inspiration, artist-led innovation and dynamic community. I established the program there to make a difference – for artists, for the community and for myself.

Artists are challenged to show a depth of engagement with the site, the community and the environment such that enduring traces result. These traces are made up of  artworks inspired by the residency, the exchange of ideas that arises in engagement with the community and lasting relationships that result from the process. A recent resident is moving to Joshua Tree to reconsider her trajectory – mission accomplished.

Residencies take place in the first half of the year and an exhibition of artworks inspired by the residency is mounted in the fall in New York. The editors of galleryIntell asked me to highlight three of the artists in the recent exhibition. 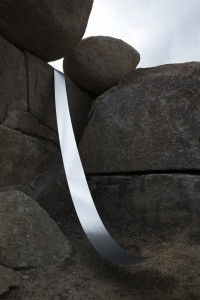 William Lamson undertook the residency in January of 2013. His work involves experimentation in which he sets up situations using simple materials and allows the qualities of the material and the outcome of the experiment to dictate the form of the artwork. In Joshua Tree, he used simple building materials set in the landscape to unlock powerfully evocative photographic images.

The first image, Untitled.1.27.2013 Joshua Tree, CA , was made at a place called Heaven On Earth in the Pipes Canyon area. It belongs to a man called Garth, who owns 600 acres of land that he makes available to anyone at any time at no charge. The only requirement is a commitment to respect the landscape and to ensure that any actions are harmonious with the place. What you see is a simple roll of brushed aluminum set within a large boulder crop to create a sense of fluidity and disruption.

The second image, Untitled. 4.27.2013 Dry Lake Harper CA, is a striking illusion created by placing a 10 foot long lighting gel in the foreground of the dry lake bed. This is the same material photographers and film makers use in changing the temperature of light for film and TV. (In the days of black and white photography and film, red gels were used to increase contrast – GI.)

What you see here is a masterful distortion of space. Because there is no middle ground in the desert, or more accurately, there are no trees or objects to define the middle ground, and therefore the sparse background makes the object appear far greater in dimension. 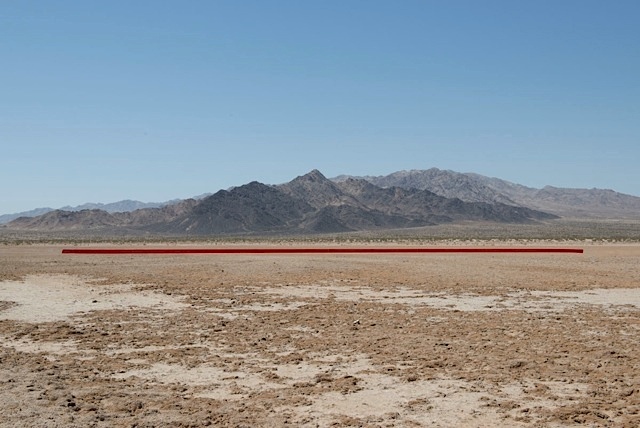 Megan Evans is an artist from Australia who came to the residency in May of this year, following three months as the Australia Council Artist in Residence at the Liverpool Biennial. Megan’s work lives within one large project called the Keloid Project which examines colonialism and its effect on contemporary culture.

In Australia, Megan examines her family history in terms of colonizing that country. In Liverpool, she dealt with Liverpool’s role as a major slaving port. And in Joshua Tree, Megan looked at the displacement of Native Americans. The Joshua Tree area was largely developed as a result of the Small Tract Act of 1938 in which five acre parcels of land were pretty much given to individuals by the Federal Government on the condition that they would improve the property. And, as happens in such situations, no thought was given to the original inhabitants of the area, the Serrano and Chemehuevi Indians, who had lived on the land for centuries in a migratory pattern that took them into the San Bernardino Mountains in the summer and down to the Morongo Valley in the winter. Displaced in the early 19th century, they currently have very limited land ownership in the Morongo Valley.

The images shown here are from her Aerial Horizon series and deal with the cultural specificity of looking at landscape. Several of these works are landscape we might expect from a colonial perspective – in elevation and landscape orientation. The other works depict original inhabitant views of landscape namely from above. These aerial landscapes depict a very different way of relating to land and raise the question of what has been lost by not entertaining differing viewpoints on working with the land.

Heather Johnson’s residency was the center of a larger project entitled In Search of the Frightening and Beautiful. Heather rode her motorcycle from NJ to Joshua Tree and back again. On her way, she stopped at sites where man had left a lasting impression on the landscape. From strip mines to Robert Smithson Spiral Jetty, to the Green Bank telescope in West Virginia. In places where she had strong experiences, Heather left behind small embroideries – an act of exchange that was central to her project. The idea was to interact with the place itself and with those who share the experiences within the same space. As part of the project Heather also left contact details attached to these pieces and already several “finders’ have contacted her. 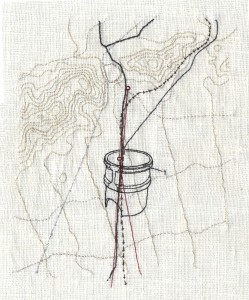 Heather’s practice is composed primarily of creating very detailed handmade embroideries that resemble highly defined drawings. She layers the embroideries so that the base imagery deals with the experience of the project and the upper layers portray mechanical drawings related to the subject matter. In the works inspired by this latest project, the under layer consists of a series of topographical and navigation maps that capture the experience of being on the road with its ups and downs and twists and turns. The upper layer is made up of technical drawings of her motorcycle and of its constituent parts. Heather considers the bike to be an extension of herself – they are as one when on the road – and the parts to be like her body parts.

The first image shown here is Cylinder Liner with Water Pumps and What was Once a Railroad Line, (left) depicting Eagle Mine near the Joshua Tree National Park. The second image, Presidio and the Big, Bright Sun, shows the town of Presidio, TX adjacent to the Big Bend Ranch State Park, (slideshow). (See additional work in the slideshow)

The BoxoHOUSE residency is proud to be associated with these artists and is looking forward to the 2014 season ahead which will include composers and visual artists from Australia, South Africa and the UK as well as the US.

Images © to the artists and courtesy of BoxoPROJECTS. For more information on the artist residency please visit the program’s site.