Paul Gauguin, (born June 7, 1848, Paris – died May 8, 1903, Atuona, French Polynesia) was as an unlikely convert to art as anyone. The painter, a descendant of Peruvian nobility on his mother’s side, spent his childhood in Lima, Peru and his early adulthood pursuing occupations absolutely unrelated to the arts. In 1873 he married and settled in Paris, working as a stockbroker. The fateful introduction to art came as a result of his guardian Gustave Arosa, a wealthy Spanish financier in Paris with a formidable collection of modern French painting. It was in Arosa’s home that Gauguin met his future mentor and patron Camille Pissarro. Under Pissarro’s mentorship Gauguin began to paint and was soon invited to exhibit his bold canvases with the Impressionists. 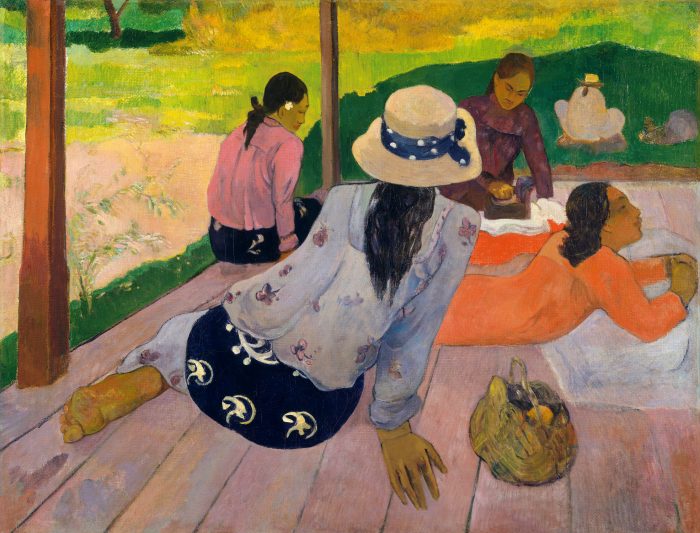 Paul Gauguin, ‘The Siesta’, 1892. Oil on canvas. In the collection of the Metropolitan Museum of Art.

The stock market crash of 1882 prompted Gauguin to take up painting full time and he soon began his own stylistic explorations.

“He painted Impressionist landscapes, still lives, and interiors heavily influenced not only by Pissarro but also by Paul Cézanne, whom he had met through Pissarro. Gauguin adopted and adapted Cézanne’s parallel, constructive brushstrokes; he in fact bought several paintings by Cézanne in order to study the brushwork more carefully.”*

Gauguin pioneered the Symbolist art movement in France and set the stage for Fauvism and Expressionism. The flatness of form, the vibrant colors and the almost geometric partition of the canvas will all be further explored by Henri Matisse and later, in a different age and in a different world, by the American painter Richard Diebenkorn.