Spring Contemporary Art Auction week brings a decent selection of noteworthy lots and a large number of auction guarantees, which are expanding across auction categories and are now being secured for works at day sales as well. Besides Jeff Koons’ spotlight-flooded Popeye and Francis Bacon’s triptych as the leading lots at Sotheby’s and Christie’s respectively, there is a number of some great and rare works that deserve your attention. And no matter how pleasing it may be to own something shiny and easily recognizable by other fellow collectors and non-collectors, it is important to collect works that speak to you, even if they cannot be easily apprehended.

Acrylic on canvas laid on board, 2000. Takashi Murakami‘s iconic character and his artistic alter-ego – Mr. Dob is looking at its own reflection in a disorienting setting. Finely painted and meticulously detailed smiling heads are juxtaposed on a flat slightly reflective silver surface. Visually the image speaks to both the contemporary pop art aesthetics and the traditional Japanese painting from the Edo period. A significantly larger, but visually similar work has been recently sold at Sotheby’s Hong Kong for $2,470,874, which leads us to believe that the estimate of $2,000,000-3,000,000 for this work is a little bit high and that it is most likely to sell between $1,500,000-2,000,000. | Sotheby’s

Magna on canvas, 1961. Number 10  is one of the iconic paintings by Morris Louis from his Stripe series. Beams of saturated colors delicately bleeding into one another create a sumptuous rainbow falling down the untouched canvas surface. Pure visual enjoyment of beautiful saturated hues is vital to Louis’s oeuvre and is an important staple to the Color Field painting movement. The painting is estimated at $700,000-1,000,000, and at this price we are certain it will find many interested buyers. | Christie’s 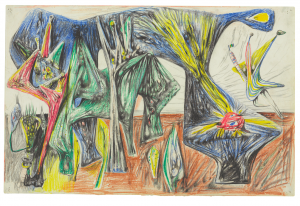 Graphite and wax crayon on paper, 1937. One of the earliest drawings by Roberto Matta comes from the remarkable collection of Edwin and Lindy Bergman, avid collectors of Surrealist art. The couple met Matta during one of their trips to Europe and developed an enduring friendship with the artist. Matta’s early signs of interest in biomorphism are evident in this dynamic composition and psychedelic palette. The shapes are stretching upwards, almost growing from the vast stretches of land reminiscent of Salvador Dali’s endless eerie landscapes. The work marks an important turning point in the artist’s career when he was about to move from drawing to oil painting. The drawing is estimated to sell between $150,000-200,000.| Christie’s 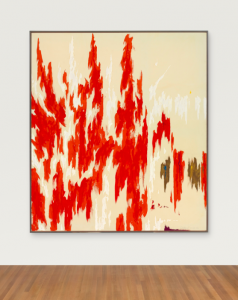 Oil on canvas, 1976. With its dynamic slashes of reds and white on an unprimed canvas, Clyfford Still‘s PH-1033 is everything you want in a high-quality Abstract Expressionist painting. Eloquent, emotionally charged, and at the same time thoroughly pondered. The red zig-zags are almost radiating electricity, while tones of brown and bright white add dimensionality to the already powerful composition. The painting is estimated to sell between $15,000,000-20,000,000 and given the rarity of works of such character and quality on the market it will most likely sell within its estimate. | Christie’s

The most enduring theme in the arts in an unexpected angle: Michelangelo Pistoletto‘s nude turned away and is looking in the same direction as the viewer. Pistoletto brings the viewer inside his mirrored stainless steel picture plane, which also opens up endless possibilities for the work’s interpretation within contemporary setting. This interactive work by one of Europe’s most innovative artists is estimated to sell between $1,500,000-2,500,000. During the preview it was installed to the right of the Bacon triptych and together the works created quite a conversation. The three Bacon paintings reflecting subtly in the nude’s personal space. | Christie’s 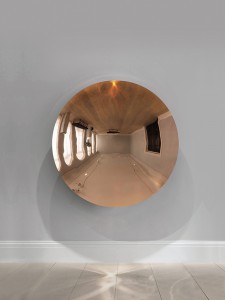 Copper alloy and lacquer, 2012. Anish Kapoor‘s splendid concave mirrors are clearly in demand on the market right now. These hypnotizing, multi-hued metallic and flat pigmented sculptures celebrate the perfect luminous surface that envelopes the viewer with its ambience. Three of these sculptures (in bright red, deep metallic alizarin crimson and green) were offered between $350,000 and $850,000 by three different galleries at Frieze art fair in New York last week. Kapoor’s other mirrored sculpture in red exceeded its high estimate and sold for $1,445,000 at Sotheby’s London last year.  The present work, executed in bronze is one of the most astonishing examples of the series, estimated at $1,000,000-1,500,000 will certainly find its buyer. However, the fact that it is being resold only 2 years after the initial purchase might signal that collectors are taking advantage of Kapoor’s hype and flipping his work, potentially putting his market at risk. | Sotheby’s

Colored pencil on paper, 2005. In his Butterfly series Mark Grotjahn elaborates around the idea of building perspective through geometric abstraction. The artist has been exploring pure primary colors and dynamic composition in his Butterfly paintings for almost a decade. The present work is a fine example of this exploration, with an almost identical sister painting held in the collection of the Museum of Modern Art in New York, the fact that certainly adds value to the work, estimated at $800,000-1,200,000. | Sotheby’s

Cor-ten steel, in four parts, 1969/78. The subject of Serra’s work is always contained in interaction of the object and the viewer. Here, simple forms and bare material convey the balance that constructs our experience by moving us around the sculpture and marveling its solidity. Serra’s elegantly simple monumental sculpture is estimated at $2,500,000-3,500,000. This piece is also a great opportunity for Serra’s admirers to acquire his work and actually have it indoors as it is relatively compact compared to his renowned colossal sculptures. | Sotheby’s 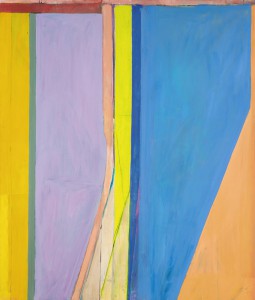 Oil on canvas, 1969. The signature core of Diebenkorn‘s oeuvre – his Ocean Park series – is a synthesis of artist’s admiration with his surroundings, persistent exploration of abstractionist language and art historical references. Application of color to Diebenkorn is clearly as important as the result – ephemeral layer of violet, peach, light blue and yellow produce a myriad of hues overlapping the layers beneath them. This monumental work, estimated between $9,000,000-12,000,000, is an excellent opportunity to appreciate the artist’s process in all respects as it completely takes over the entire space and at the same time draws you in with its multiple layers.| Sotheby’s

Oil and silicone on canvas, in four parts, 1984. In present work Martin Kippenberger boldly elaborates around art historical references. From Christie’s: “Kippenberger takes on several masters of Modernism – not only Picasso’s synthetic Cubism, but also the Cubism of Francis Picabia and Juan Gris, as well as the metaphysical paintings of Giorgio de Chirico and the reduced color geometries of Henri Matisse.” Given astounding success of Kippenberger’s self-portrait selling well above its high estimate for $18million at Christie’s sale last night, we would expect demand for his work to increase and the work to confidently sell between its estimate of $700,000-$1,000,000 or higher. | Christie’s