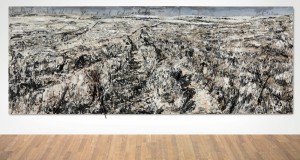 Out of the 72 offered lots 68 lots sold for a grand total of $744,944,000. The sale represents a huge success for the auction house considering that during the record-breaking evening 94% of all lots offered were sold earning 98% sold by value. One of the surprises of the evening was an Anselm Kiefer Beschwert Sind Die Östlichen Himmel Mit Seidengewebe… The Eastern Skies Are Laden With Silk…a typically mural-sized abstracted landscape listed with an estimate of $2,000,000 – 3,000,000 that went unsold.

The evening’s top grossing lot was a simple, austere and zen-line Barnett Newman black and white Black Fire I, oil on canvas, Painted in 1961. The total hammer price, which included the buyer premium and all fees came to just north of $84 million and thus set a new world auction record for the artist. At this point the buyer is unknown, but we are certainly waiting to see if the identity will be revealed in the upcoming days and weeks.

Francis Bacon’s Three Studies for a Portrait of John Edwards, oil on canvas, in three parts, painted in 1984 sold for a fraction of the previous triptych for a total of $80,805,000. According to Christie’s the buyer is an unidentified Asian collector, so it won’t be showing up in Portland any time soon.

Rest of the top 10 grossing lots are as follows:

The luminous wall-size painting was purchased by another anonymous collector for $66,245,000

Race Riot, acrylic and silkscreen ink on linen, in four parts, painted in 1964.

Gagosian Gallery bought the large painting for $62,885,000 (most likely for a private client)

White Marilyn, acrylic and silkscreen ink on linen, painted in 1962.

Estimated to sell between $12,000,000 – 18,000,000 but sold to a private collector for $41 million instead – more than double its high estimate. With so much attention paid to Warhol’s work, we will, undoubtedly learn his/her name very soon as well. 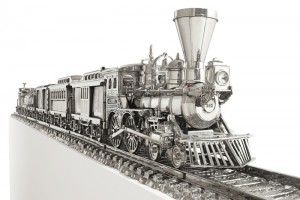 The super shiny train reproduction was bought by an anonymous collector, and for $34 million they paid for it we hope they really enjoy the bourbon too!

Sold to an anonymous collector right within the estimate for $29,285,000

WORLD AUCTION RECORD FOR THE ARTIST

Once again the buyer was Gagosian Gallery, most likely purchasing the work on behalf of a client who prefers to remain anonymous.