We’d like to highlight one lot from Sotheby’s sale of Fine Classical Chinese Paintings and Calligraphy. Wang Shouren, Poem “Parting at the Ye River”, 1504, exceeded its high estimate of $80,000. By how many times? 25!

Rongde Zhang, Head of Sotheby’s Chinese Classical Paintings Department in New York, said: “Throughout our sale we saw collectors go to great lengths to pursue the rarest pieces, often sending prices far in excess of the high estimate. There was tremendous pre-sale interest in the album of poetry by Wang Shouren but the $2 million price was still a wonderful surprise.”

Other items featured in the sale: 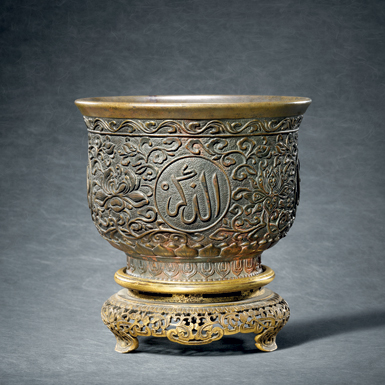 An Arabic-inscribed bronze incense burner cast mark and period of Zhengde to be offered during the April 8th “Water, Pine and Stone Retreat Collection: Later Bronzes” sale in Hong Kong.

This is a classic example of Islamic bronze. Religious nature of its inscription tells us that it was used in a Mosque. “It is inscribed in sini script, a Chinese Islamic calligraphic form for the Arabic script, developed in the early Ming dynasty. It can refer to any type of Chinese Islamic calligraphy, but is commonly used to refer to script with thick and tapered effects, such as on the current box. It is used extensively in mosques in Eastern China, and to a lesser extent in Gansu, Ningxia and Shaanxi. Early examples of the script date to the early Ming dynasty, notably the mihrab of the Niujue mosque in Beijing. The mosque itself was founded in 996 during the Liao dynasty, but rebuilt in 1442 during the Zhengtong era.”