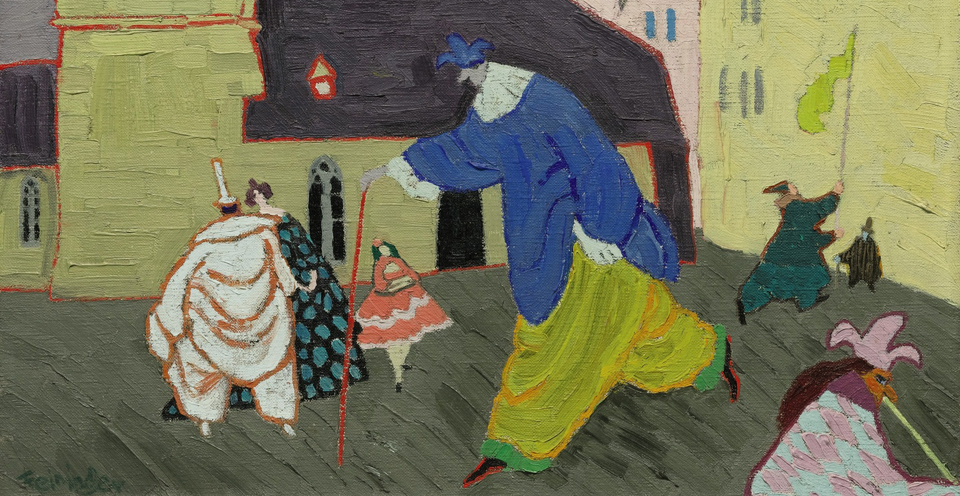 Top 10 auction recommendations and not a single Picasso!

If we were facing the task of pointing out the superstar of the upcoming Impressionist and Modern sales in New York that would undoubtedly be Pablo Picasso. It is certainly good news for someone who was looking to purchase a Picasso this auction season because there will be a plenty of interesting lots to choose from. We love Picasso, don’t get us wrong, but it is the sheer volume of the prolific artist’s works that makes us shiver. Thirteen Picasso canvases will be offered in Christie’s and Sotheby’s evening sales (26 total, that’s right). Not to mention the coinciding sale of Important Ceramics by Pablo Picasso at Sotheby’s, London featuring some 170 lots (!) with prices ranging between $700 and $100,000, as well as Christie’s online only two weeks long sale of… yep, Pablo Picasso Ceramics! Is it safe for the Picasso market to have so many of his works up for sale at once? Time will tell. All we know is that lately the artist’s plethoric output dominates the auction catalogues which can, at times, overshadow some of the other important works.

So, for our Top 10 Recommendations we bypassed the obvious trophies and picked a total of 10 must-see works also bypassing Picasso. Here are some of the works we feel you should pay close attention to. 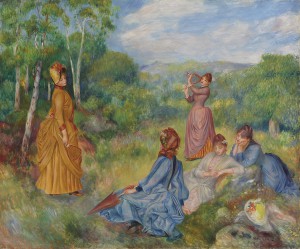 Oil on canvas, circa 1887.  Jeunes Filles Jouant au Volant depicts five young women playing badminton in a rural landscape. The painting belongs to the period of Auguste Renoir’s aesthetic crisis when the artist became dissatisfied with Impressionism and reintroduced traditional painting techniques to his art. Contours of figures and faces are highly accentuated, brushstrokes are hardly visible and the light is generalized. The subject matter itself is highly contrasted to Renoir’s works form the 1870s and early 1880s, which typically evolved around crowded Paris boulevards and cafés. Seeking to depict timeless environment Renoir began placing his unchanging models, women in elegant costumes and florid hats, in intimate rural settings. This painting is one out of three Renoirs coming from the important collection of senator Clark (and his famously reclusive daughter Huguette) and has been in the family for more than five decades. The painting’s well-regarded province certainly adds to its high estimate range of $10,000,000 — 15,000,000 and should there be enough interest at the time of the sale, it would probably sell around $8 – 9 million. | Christie’s

Oil on canvas, 1883. Gustave Caillebotte, whose subject matters substantially varied throughout his career (from nudes and urban scenes to parquet planers and rural landscapes) began spending more time working on still lives and gardens starting in 1880. The present delightful floral still life comes from that period and represents one fine example of Impressionist Nature Morte and artist’s mastery of brushwork. Caillebotte painted lilacs, peonies and leaves with three different kinds of loose brushstrokes, with petals highlighted with rich white impasto, and to contrast the bouquet smoothed the vases and walls using flattened and modulated brushstrokes. The work is estimated at $1,000,000 — 1,500,000. We feel it’s a fair estimate. | Sotheby’s 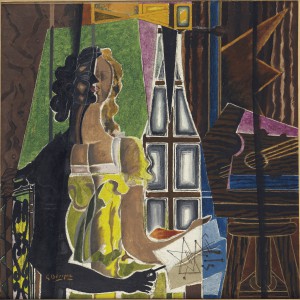 Oil and sand on canvas, 1939. In Le Modèle Georges Braque brings together multiple themes: elements of still life and the model are harmonized within an elaborate Baroque interior. Multi-layered compositions imbued with numerous contrasts of imagery, color and form epitomize the artist’s mid-career period and mature manifestation of Synthetic Cubism. Braque’s model acting as a central element here is radically lit en face and backlit as a silhouette. The schematic drawing she is holding, practically showing it to the viewer, is reminiscent of newspapers and music sheets that Cubists made use of early on in their compositions. The artist’s benchmark interiors from 1936-1939 prove once again that Braque had been continually modernizing and enriching the Cubist tradition throughout his career. Le  Modèle, a relatively late work in Braque’s career, is estimated at $8,000,000-12,000,000, an optimistic estimate in our opinion, but the work is well-executed, so it’s possible for it to realize the range. | Christie’s

Oil on canvas. 1934. Dali’s work doesn’t appear much on the pages of this publication, but maybe it should. Moment de Transition is among Salvador Dali’s earliest and most successful attempts of depicting a double image. The driver and the passenger in the cart can be alternatively read as the silhouettes of towers in the distant village on the horizon line. Dali started his first experiments with the double image in 1929, when he officially joined the Surrealist group, and had been perfecting it for years with an ultimate goal of visualizing the relativity of time, most famously addressed with his melting clocks and watches, and challenging the viewer’s paranoiac-critical mind capable of processing images irrationally. The early 1930’s also characterize the period when Dali painted his highly important series of dream-like eerie landscapes, endlessly stretching over the horizon line. Thus, the present painting comes to represent two important milestones of Dali’s oeuvre and deserves well its estimate of  $10,000,000 — 15,000,000. | Christie’s

Pastel on canvas, 1896. Edgar Degas had been exploring the theme of ballet dancers throughout his career, which certainly resulted in a huge body of work dedicated to this subject. Over time his primary interest in movement shifted to color, hence the static poses of the models in Deux Danseuses Assises. This is one of the rare pastels where Degas rendered the theme on canvas instead of paper, which allowed him to improve shading and tonality. The present work, coming from the series of drawing depicting ballerinas stretching in preparation for the performance, is estimated to sell between $3,000,000 — 5,000,000. | Sotheby’s 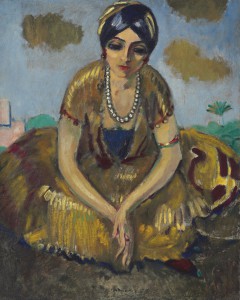 Oil on canvas, 1913. Kees van Dongen completed Egyptienne au collier de perles the year he travelled to Egypt. He deliberately forgone distractingly bright colors, choosing instead a tempered palette typical of many of his famous works. It seems that van Dongen was almost challenging himself with producing a Fauve painting without making use of vivid colors and high contrast. Luminous ochres of the lustrous dress finely echo three Raw Sienna clouds in the background, and are just slightly contrasted to the cold emerald-green foliage. There is almost antique touch to this portrait permeated with mystery and exsotisism. In 2005, Egyptienne exceeded its high estimate of £650,000 and was sold for £848,000 ($1,545,056) at Christie’s, London. We expect the painting to sell around its low estimate of $2,000,000 — 3,000,000. | Christie’s

Bronze, conceived in 1962 and cast in 1963. An extremely rare cast of the near life-size portrait of Alberto Giacometti’s wife Annette who, along with his brother Diego was one of his most important muses. The work has not appeared at auction since 1999 and is one of the first busts Giacometti made of his wife. From Sotheby’s: “the relationship between the artist and subject is evident in the sense of scale that he embraces: the relatively large scale of the head compared to many of his other portraits brings about a sense of intimacy through its implied sense of proximity.” Giacometti’s 23″ tall bust is estimated to sell between $3,000,000 — 5,000,000.| Sotheby’s 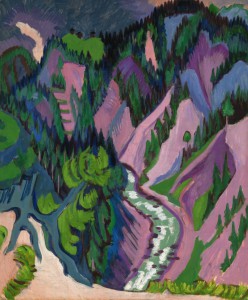 Oil on canvas, circa 1925. Ernst Ludwig Kirchner painted Im Sertigal during the years he spent in Davos (1917-1925), where he was recovering from the consequences of WWI. Im Serigal comes from the series of panoramic Alpine views where Kirchner celebrated the magnificence of the landscape in his distinct expressionist manner. Wide brushstrokes and contrasting palette of this work is visually closely related to his Winter Landscape in Moonlight, 1919, currently on view as part of the Degenerate Art Exhibition at Neue Galerie. And while we can’t have the Winter Landscape.. (currently in the collection of Detroit institute of Art), we would certainly make sure to bid for Im Serdigal, quite reasonably estimated at $800,000 — 1,200,000. | Sotheby’s

Oil on canvas, 1927. During 1927-28 Fernand Léger grew tired of strict classical structure that he used to organize his earlier compositions and began incorporating more organic shapes into the architectural settings, as opposed to rigid, geometric shapes of mechanical elements in his industrial landscapes. This work also represents Léger’s attempt to draw all attention to the object itself, an individual element within a picture, instead of the subject that in a way restrains the composition and dictates the rules. From Christie’s: “Les Fruits… and other works in the “leaf” series are clear demonstrations of the process by which the artist has isolated, magnified and in effect showcased the object, having removed it from its customary context–in this case, the conventional landscape of trees (the subject).” Yet the artist still inscribed ‘Nature-Morte’ on the back, probably to himself, just in case. This is a well-preserved work, with all pigments retaining their saturation. It’s estimated to sell between $2,500,000 — $3,500,000. | Christie’s 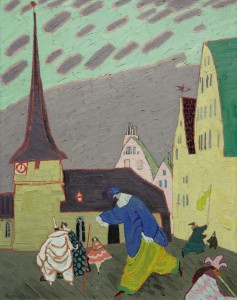 Oil on canvas, 1908. Lyonel Feininger painted his very graphic Karneval in Gelmeroda II after doing a series of sketches and drawings of the church of Gelmeroda. All individual elements are constructed out of flat geometric shapes, practically without any gradations of color. Feininger masterfully depicted spatial depth by directing the brushstrokes along the lines they are filling. The central figure of a clown is holding a stick of the same bright orange hue used to outline all the elements in the composition. In his monograph about the artist, Hans Hess maintains, “The figures in silhouette reveal Feininger’s preoccupation with the outline as the sum of all possible views of an object. The silhouette contains the body in all its movements… The picture excludes emotional participation; it is a painting of movement and place. It is a comic scene, but essentially a study in space and speed.” In 2002 the painting sold for $1,081,753 and right now is estimated between $4,000,000 — 6,000,000. It might be a little high but given the work’s rarity and fine Fauve colors Karneval in Gelmeroda II would certainly grace any collection. | Sotheby’s