David Wojciechowski: This is the work of George Nama, who is an artist that we’ve been showing for some time at the gallery. These are the works that have been done primarily from 1958 until 2008. It’s a retrospective and it’s some of the first times that we are showing any of his earliest works. He is probably best known for some of his artist portfolios, books that he’s worked on with some very, very serious poets, musicians and writers over the years. 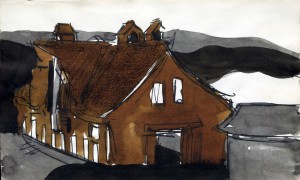 It all goes back to Pittsburgh, primarily Homestead, all views of George’s hometown in Homestead, in Pittsburg, they are very early on in his career, they were done in about 1960-1962 and are highly accomplished works of art. He uses casing paint, oil, pastel, charcoal, it’s a very experimental approach in order to get a lot of this kind of textures in here. That’s why we named the exhibition Fleeting Images, he said if he couldn’t quite get it immediately, it was gone forever. 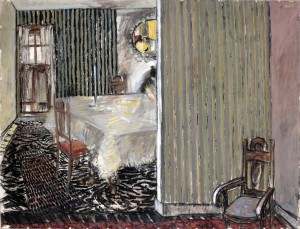 This is one of George’s earliest works, it’s of his mothers house. It has a very european feeling, it also introduces a lot of dicentric matter, which will be important to him later on as far as his turn to abstraction as a form. George continually revisits these themes and with his sketchbooks, as far as the trees, he’s very interested in nature. His earlier trees eventually wind up into his abstractions. It was an unconscious move to abstraction, he has very early pictures of the bridges of Pittsburgh and it’s all the same kind of things that he works on twenty years later in these very abstract collages that he does with same concerns.

So, these are some of the books that George has produced over the years. All of these forms, even though they became very abstract, are rooted in realism. He became a teacher at The National Academy of Art here in Manhattan and he was a very well respected print making teacher.

A lot of these things, you do have that sense of somewhat timelessness but also that it could have gone in a second.