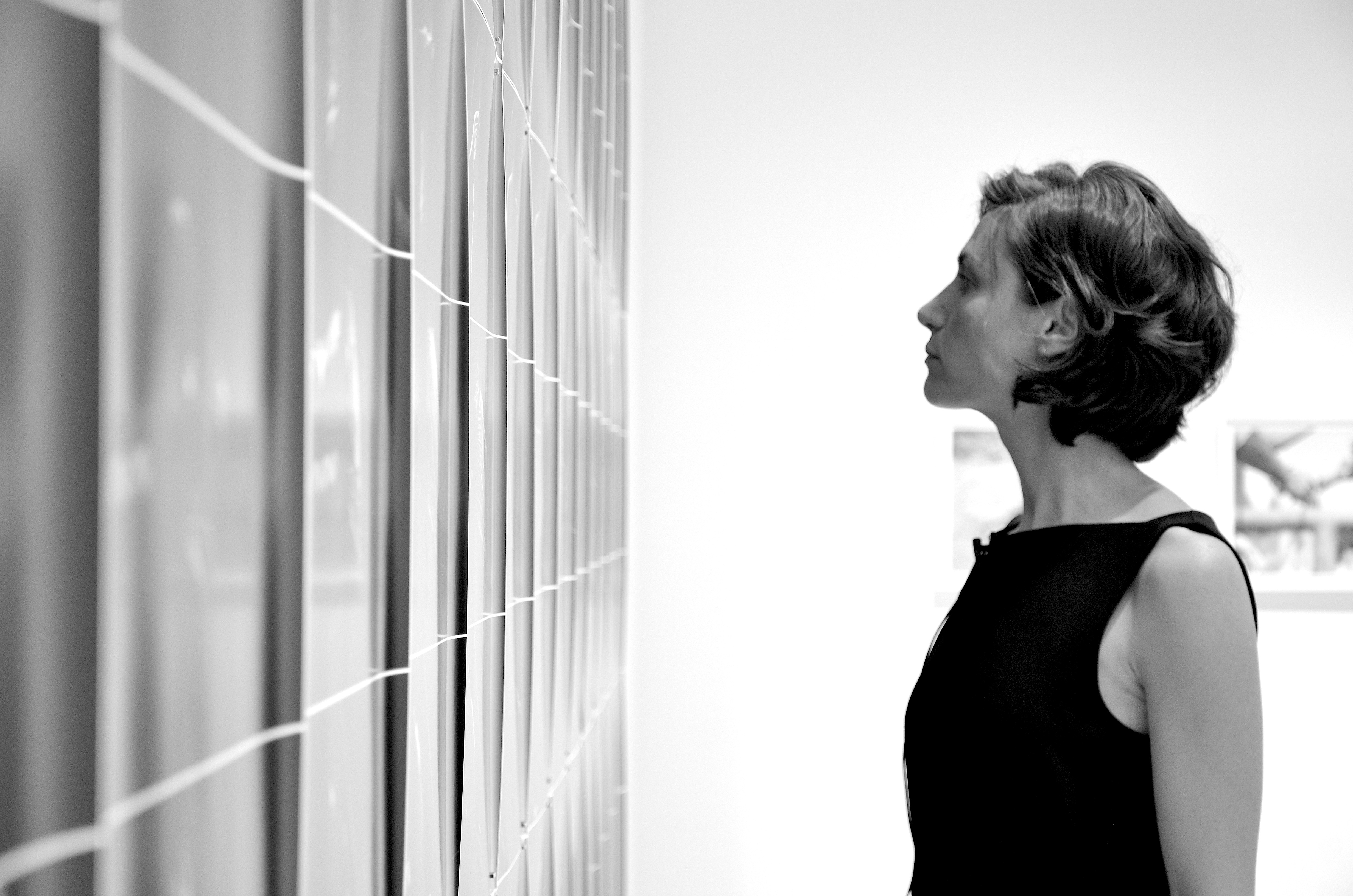 Our interview with Kate Joyce, a Nationally acclaimed photographer from Chicago focuses on her latest body of work called HIT. The large wall of sequential photographs as well as several single frame images re-trace the 72 home games during the famous Minor League team’s season in 2013. Why 2013? The year happens to mark the 25th anniversary of the feel-good-hit Bull Durham that made Kevin Costner a film star and added to the cache of Hollywood baseball-themed films.

Kate Joyce’s previous series of work are far from the sport, focusing instead on the deeply emotional interior and exterior spaces, often quiet but always familiar. And so it is that reticent, studied,  introverted approach to the very public game of baseball that makes the effort that much more remarkable. The artist used the game –  something that is known and beloved by so many into a multi-layered range of art historical references that include classic Roman and Greek sculpture and Eadward Muybridge‘s first real attempts at motion picture photography. 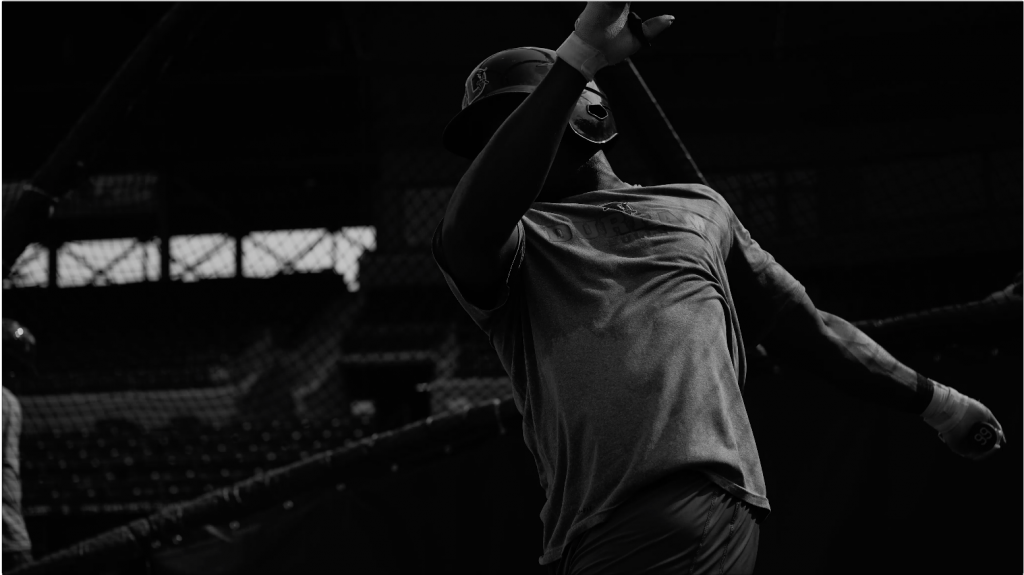 The resulting installation at Rick Wester Fine Art is a series of highly contrasted silhouettes that obscure any identifying marks of the team, instead focusing on the movement, rhythm, form, gesture and space – some of the key elements of composition.

Kate Joyce: This [installation] behind me is called “HIT” and it’s a part of a large installation that we see here and it’s also in video format. It comes from a group project called Bull City Summer that involved many different photographers and writers, all directed by Sam Stephenson, a writer in North Carolina.

I found that going to batting practice allowed me intimacy and proximity. I would spend hours and hours with the team as they went through batting practice. It would take place in the heat of the day and I would crouch down below the cage and photograph the hits, one after the next, after the next and initially I was drawn to the players’  musculature. During that time of day they are drenched in sweat, so there is this draping of their clothes . It was the physicality of the act: both  the grace that I would see and the gestures. There is this release and this explosion and being right next to it and seeing both, that grace and the violence… Initially I thought  I would edit this Muybridge-like chronology, I would edit out some of these key images, like a favorite gesture. But each time I isolated them it just fell apart. So, I thought more that motion was very important and this idea of hitting one after the other, after the other when each hit is very different and you also start to see the personality in the players’ body language. One player is absolutely different from the next player. Thus keeping them in a sequence was very important.

I was thinking about this relationship and history of dance in my family and the way that the pitchers and the batters, but in this case the batters have with motion and choreography. It was graceful and familiar, it looked like dance on some level.

I was actually walking through the Met in New York midway through the project, looking at all of the Greek and Roman sculptures where most of them, through vandalism or accident or natural causes have lost their limbs and other vulnerable parts of the sculpture and are left as these really intriguing torsos. In the photographs, the way that I’ve darkened them and the way that they are wearing gloves, there is almost a breaking up of their limbs that reminded me of the Greek sculpture. 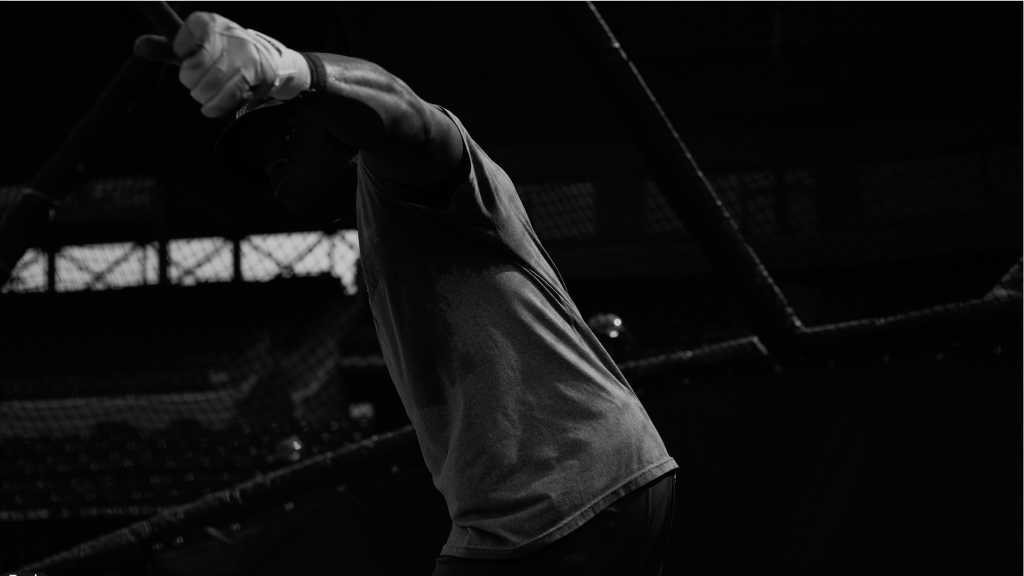 I did want to leave the viewer with an open question and a sense of not focusing on statistics and what happened to that hit – we don’t know what the result was and I like leaving that openness. By not allowing us to see their faces there is a disconnection: they are alone and you are alone, looking at them. You can’t confront their personality and that immediately sets you back.

To talk about why they are printed so dark, with a very high contrast – I was interested in this very formal graphic and sculptural quality of their bodies, but was very distracted by the background which was the stadium chairs and sometimes you’ll still see the shadows of people and other players waiting in the wings, so to speak. And the color of the stadium itself was this teal and blue and all that felt really, really distracting, so I wanted to pull it back. The emblem for the Durham Bulls shows up here but I didn’t want that to be the primary focus, which is so often the primary focus in sports – this allegiance to the colors and the emblem. For me that didn’t mean anything, what’s more I wanted to make work that would interest people who had no interest in sports or didn’t know how to relate to it. So stripping all of that way and leaving it with that shadow murkiness that can talk about how unknown the act of practice is. It’s as unknown and as necessary as the act of faith and there is no guarantee that you will hit a home run if your batting practice is excellent.

I could relate to that as an artist as I am hoping to make images that are impactful – they don’t always “hit”. We certainly have many more misses than hits. So this was a very familiar territory for me to be behind the scenes where nothing is yet complete and you haven’t yet walked out on the stage in front of your fans, so there is a little bit less at stake, but it’s a very important moment.

This interview © galleryIntell. Photographs courtesy of the artist. You can view the work itself at Rick Wester Fine Art in New York. Please mention galleryIntell interview for full access to the exhibited work.