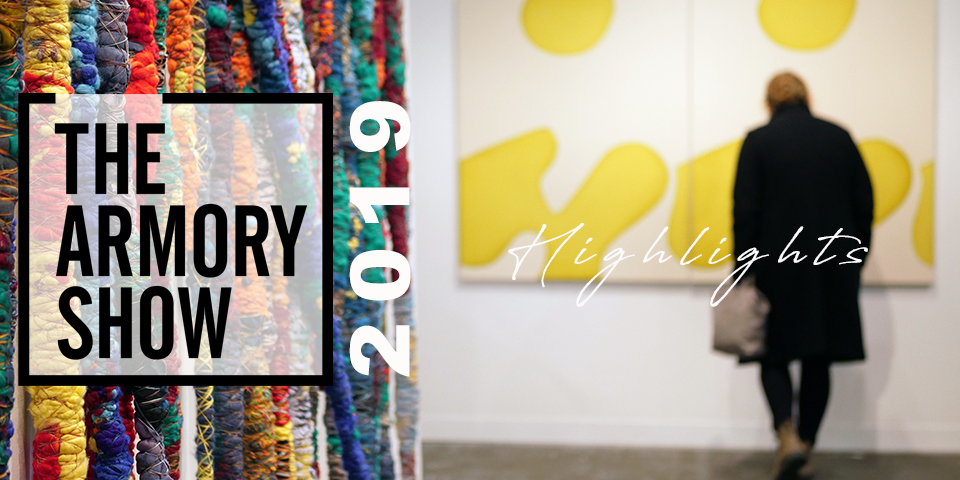 First things first. HUGE kudos to The Armory Show team for re-grouping and re-configuring an entire section of the fair when, 11 days (!!!) prior to install, the City of New York declared that Pier 92 was structurally unsafe. The Armory Show leadership, together with Amanda Coulson, Volta’s creative director, decided to cancel Volta NY (Basel will go on as planned), refund all exhibitor and sponsor fees, move the Pier 92 galleries to Pier 90, organize shuttle transportation to Pier 90, and get all new signage and maps! Hats off to everyone on your team!

The [best in the] Armory Show

With this new footprint, Insights (formerly the Modern art section) and Focus took over Pier 90 while the Contemporary galleries, with a sprinkling of Modern art staples, like Michael Rosenfeld Gallery, stayed on Pier 94. The fair felt more coherent overall, aided in no small way by the fact that many galleries chose to show a single artist. As I’ve always said, this helps collectors to better understand the artists’ message, choice of medium, their process, and, for collectors, minimize sensory overload. And when collectors are happy – galleries are happy.

So, here are some of our top pics from this year’s Armory Show!

Erik Thor Sandberg is known for pushing the skillful illusionism of master painting to the contemporary edge of Magic Realism on three-dimensional wood panels of his own design.

A series of revealing blossoms of the human soul, femininity and expression Sandberg’s surreal portraits made me think of Paul Auster’s signature interweaving layers of reality. Sandberg’s current work seems to be filled with allegories typical of the Dutch Baroque and it’s worth while seeing some of his earlier (much more explicit and in some cases disturbing) paintings where Surrealism is intertwined with late Renaissance and Bosch-like imagery. Erik Thor Sandberg is known for pushing the skillful illusionism of master painting to the contemporary edge of Magic Realism on three-dimensional wood panels of his own design. 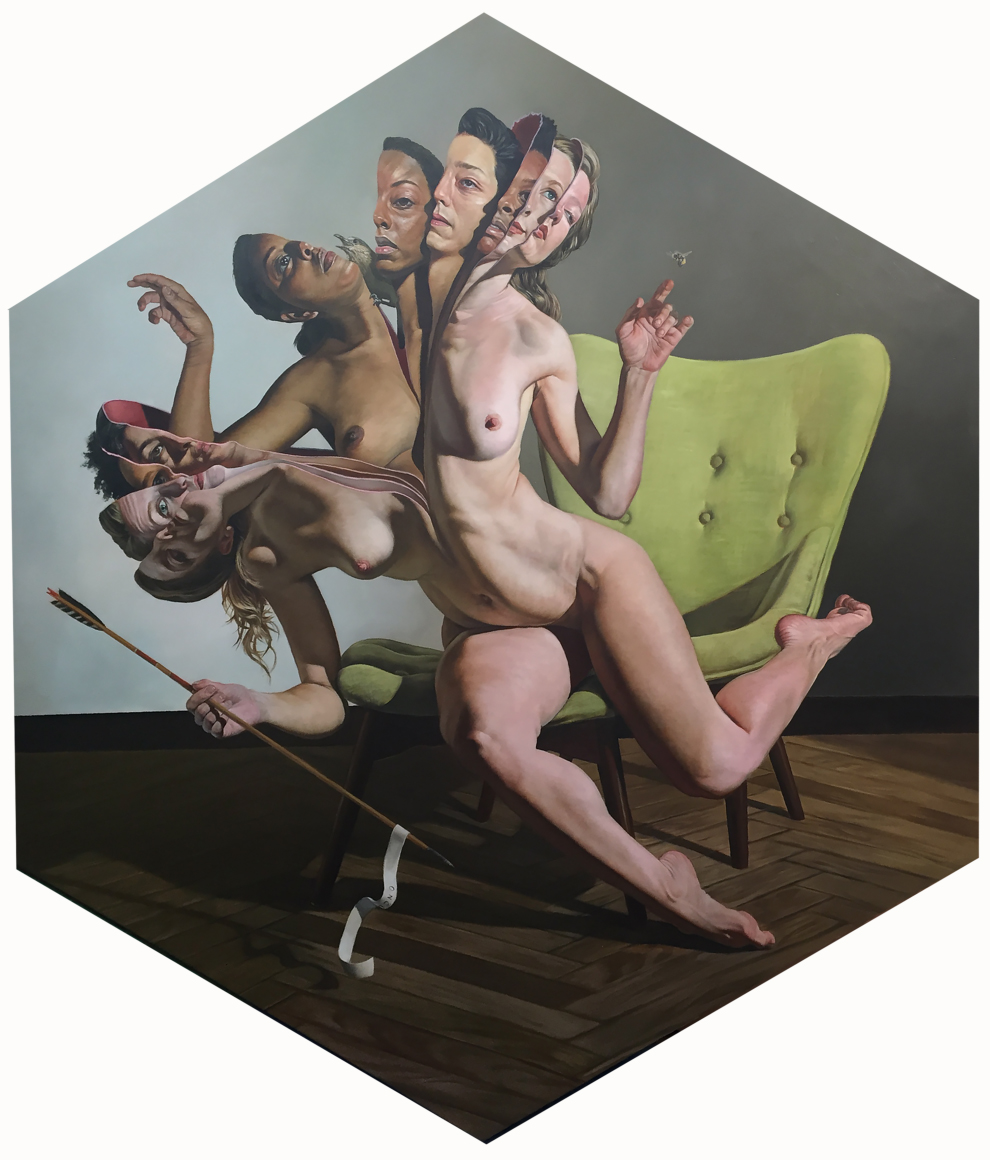 A statement on the Sandberg’s website addresses this contrast: “How often the disturbing and the grotesque capture the viewer’s gaze before the beautiful! Yet, beauty, eternally appreciated, remains an essential component of Sandberg’s work as it contrasts the unsettling and unsightly elements of these imaginary worlds that hinge, unsettlingly, on the verge of our own.” For those seeking deeper understanding of Sandberg’s work I’d recommend reading CONNERSMITH.’s statement.

One of the most striking artworks at the fair is the large-scale marquetry hybrid by Alison Elizabeth Taylor. As she describes the work on her Instagram account: “This is from a hike in Grand Staircase Escalante National Monument called the Toadstools. Presidential proclamation has stripped this area of its National Monument status and it is now vulnerable to mining and drilling leases.” 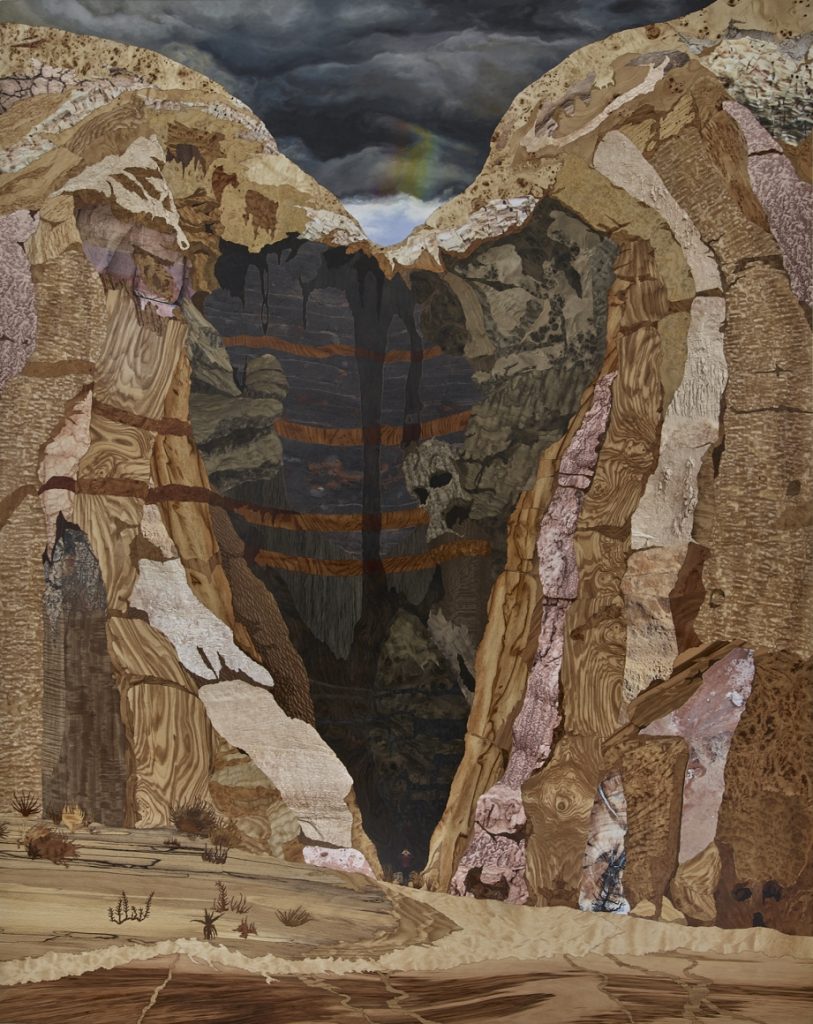 “Alison Elizabeth Taylor has become well-known for reinvigorating the Renaissance craft of marquetry, or intarsia wood inlay.  Recently, after working within the boundaries of the limited palette afforded by natural woods, Taylor now mashes marquetry and paint in unprecedented ways creating a new perspective on painting.” – James Cohan Gallery.

It’s difficult to categorize Nate Lewis’ works as they do not simply fit into one medium category. Instead they combine many, each adding depth, context and direction. The figurative image offers a familiar subject and defines rhythm. The incisions transform the two-dimensional surface into something deeper and divide it into distinct focus areas. The gentle stains of red, gray and blue ink counter the precision of the cuts, allowing us to surface once again and flow as one with the body’s fluid movement. 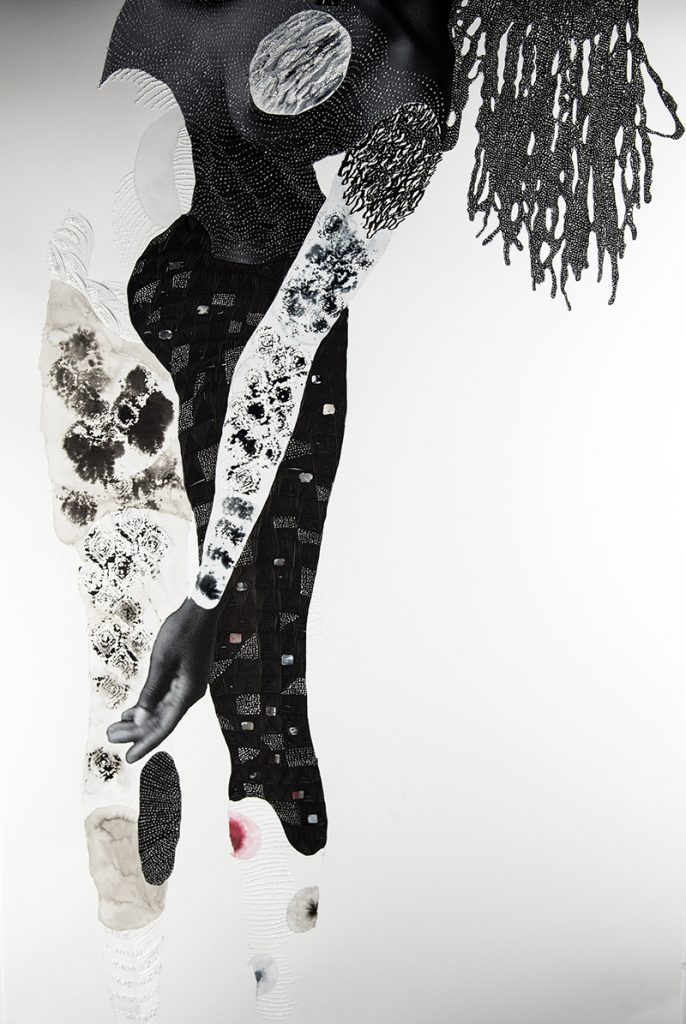 Think of these as embroidered songs. Each thread carrying its own note, together creating a unique tune. We first profiled Do Ho Suh back in 2012. Since then the artist has acquired much more exposure and even had work shown at The Brooklyn Museum where you could walk through a scale recreation of his New York apartment.

Ever pondered what an Etruscan room looked like? Perugia-born Carlo Dell’Amico has dedicated much of his career to imagining these spaces and interpreting them on two and three-dimensional surfaces. 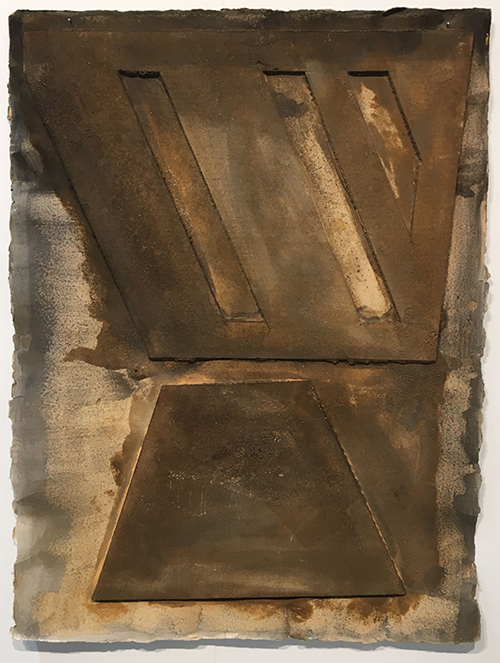 “Carlo Dell’Amico deals with Etruscan world suggesting a re-appropriation of sacred architectures that he modulates in geometric composition of intense symbolic meaning, bringing him to question value of esoteric which leads to the alchemy of the body knowledge.” –

Leonardo Drew is one of those child prodigies who have their first shows at the age of 13. The artist has worked with a range of media including found objects and wood and now spends much of his time in the printmaking studio where he essentially sculpts (casts) paper into luscious organic forms. Some areas are left raw and some are rubbed with pigment and silver.  Pace Prints is showing several works by Drew at the Armory  including a sublime diptych that you can’t walk by and not be swept off your feet.

At first sight the trio of various scale sculptures startles you with a burst of color and texture. Closer inspection reveals the subject – rotting fruit. Then, like a moth to a flame, you’re drawn to examine the sculptures one by one

Works by the Nebraska-born Sheila Hicks were included in the 2017 Venice Biennale,  2014 Whitney Biennial in New York,  the 2012  São Paulo Biennial in Brazil. Recent solo presentations include “Lignes de Vie” at the Centre Pompidou in Paris in 2018, Free Threads 1954-2017 Museo Amparo, Mexico,”Pêcher dans La Rivière” at the Alison Jacques Gallery, London (2013); A major retrospective Sheila Hicks: 50 Years debuted at the Addison Gallery of American Art and traveled to the Institute of Contemporary Art, Philadelphia and the Mint Museum, Charlotte, NC.

The 85 year-old artist trained as a painter and later “became interested in global, and particularly South American, textile traditions, going on to develop her distinctive merger of painting, sculpture, drawing, and weaving. For her, the way that the richly colored lines of her pieces move and intersect is a form of drawing in three dimensions.” – Whitney Museum Of Art.

The natural inclination is, of course, to compare Moffat Takadiwa‘s sculptures to El Anatsui’s intricate large-scale “tapestries”. After all, both hail from Africa (Anatsui is from Ghana and Takadiwa is from Zimbabwe), both work with found objects, both create large scale abstractions that reflect traditional African patterns. And while Anatsui’s sculptures shimmer and flow in almost aerial landscape formations, best seen at a distance, Takadiwa draws you in close and makes you want to touch every bristle, every key, every bottle cap – something no sane American would ever want to do with discarded toothbrushes, bottles or used keyboards. Such is the beauty of Takadiwa’s works. 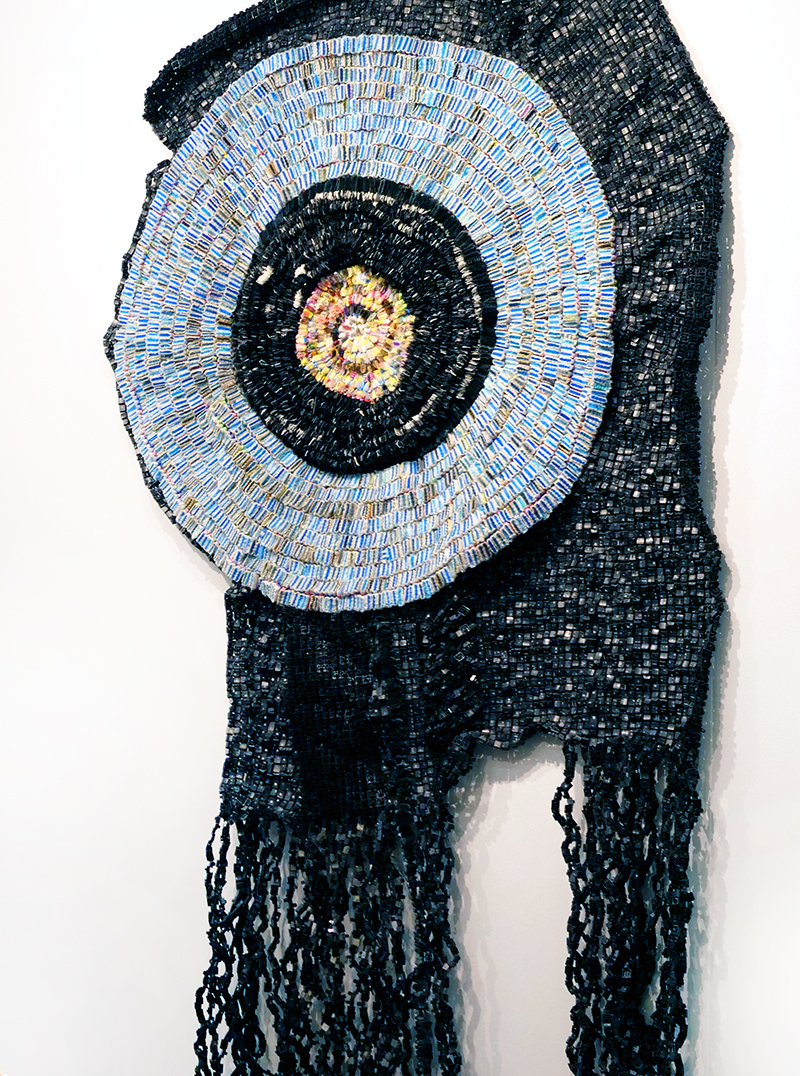 From an interview with True Africa: “I have a team of people I work with. Some of them.. actually, most of them are involved in working in the dumps. They are garbage people. Garbage collectors. So I work with a lot of garbage collectors and a lot of people in my studio and they are the ones that help me collect these materials.”

And here’s something to ponder. Takadiwa says that the reason he’s chosen English keys for his work is to show how the English language has colonized African culture. “Before, in the history of Africa, a lot of students died demonstrating for languages. And now, in my own generation, we have got students that are demonstrating again against languages, against that sort of thing.

So I went into the streets and into the dumping sites with my team and we collected these computer keys, about two to three months collecting for these works. The computer keys are like libraries and are like writing instruments. They meant quite a lot to me and I destroyed them. Physically. And I unplugged the keys, and then we used them to fabricate my own language. I destroyed a colonial language. They belong to a different generation. The older generation.”