What a difference an auctioneer makes! Last evening’s Post War sale at Sotheby’s carried a strong and confident energy straight from the start as the Principal Auctioneer and the Worldwide Head of Contemporary Art of Sotheby’s, Tobias Meyer held fantastic pace, pausing just enough to draw out another bid with his signature “I have five million – say five million- five”! He never lost momentum and the packed-to-the-rim cavernous seventh-floor room stayed largely glued to his gavel throughout the evening. 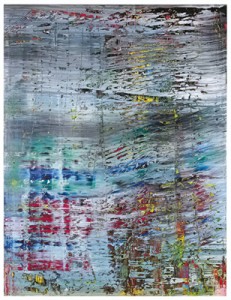 The Alexander Calder painted metal sculpture Escutcheon II began the sale quickly exceeding the high estimate and netting $842,500. Next came a duel over the Franz Klein ‘ANT SU’ (Interesting work, that makes a much bigger impression in person) swiftly flew past the high estimate bringing in close to $4 million + buyer premium.

The iridescent blue-grey Gergard Richter ‘Abstracts Bild’ (left) with an unlisted estimate, danced a quick-paced waltz from $10 million, settling a short while later at a well-placed $17.5 million. The work was truly sensational and the zeal with which the bidding ensued was well-justified.  The quietly syncopated Cy Twombly ‘Untitled’ work on paper just edged to the low estimate of $350,000 setting the stage for the next two lots that mirrored its result. 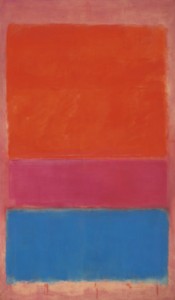 The blockbuster lot of the evening was the 1954 Mark Rothko ‘No 1 (Royal Red and Blue)’ estimated to sell between $35,000,000 – $50,000,000. The painting has been in the same collection since 1982, making it a rare visitor to the auction block. As Mr. Meyer opened bidding, paddles went flying and phone bids began to pour in. Numbers, decimals, then whole numbers again streamed like in The Matrix. Dueling phone bidders waged a fast and fierce battle for the luminous canvas with stacked red and blue color blocks, the winner ultimately paying $75.1million (including buyer’s premium). The room cheered to Mr. Meyer’s “I need some water!” and followed him into the next lot – the David Smith sculpture that didn’t quite manage to meet the low estimate, but sold for $1.9 million.

Lot 26, Francis Bacon’s ‘Untitled (Pope)’ was another smash hit of the evening. The dark and powerful painting of the purple-cape-clad Pope with a contorted face has not been shown to the public in 40 years.  Since its creation in 1954 Bacon’s Untitled (Pope), part of the series he did based on Diego Velasquez’s ‘Pope Innocent X’ paintings, has been in private and corporate collections in France, Italy, Switzerland and the UK. During the sale the mid-century masterpiece confidently reached the $25 million mark, held a well-timed pause and calmly sailed to its final price of $26.5 million (hammer price with commissions – $29,762,500 ). Once again, fantastic energy from Tobias Meyer, who at times appeared to conduct the room with his gavel.

Lot 36, the sensual ‘Ohne Titel’ by Sigmar Polke daftly smashed through the high estimate of $1.5 million, once again energizing the room, sparking another bidding competition, this time among the collectors in the room, and bringing in a solid $4.1 million for the 1986 canvas. 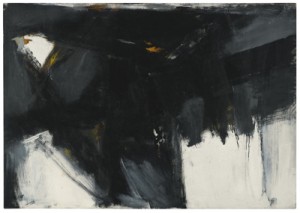 Other notables from this evening’s sale were the incomparable and rare Franz Kline collages, their more prominent canvas counterpart – “Shanendoah” (left), a saturated and emotional work that sold for a solid $8.25 million (before bp) – $9.32 million including all fees; the intimate and dense “Number 4” by Jackson Pollock; one of my personal favorites, a superbly concentrated and confrontational work by an Armenian-born Arshile Gorky titled “Impatience”; and the lavender, cream and rose Untitled work by Joan Mitchell from 1961. The latter sold for its low estimate, although deserved a much higher result. (Abstract Expressionists have slightly more women artists among them – Helen Frankenthaler, Joan Mitchell, Elaine deKooning, Lee Krasner, to name a few, but they still represent a radically small percentage of the movement and therefore are not as visible at major sales. It should also be noted that Mitchell’s popularity has seen a steady growth over the last several years and the demand for her work appears to be strengthening.) 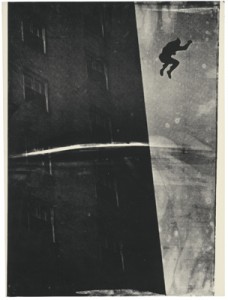 The historic work by Robert Motherwell “Elegy to the Spanish Republic #122”, (works from the same series are part of MoMA’s permanent collection,) missed its high estimate by $200,000 selling for $3.2million (before bp).

Andy Warhol’s rare black and white unique silkscreen prints on  paper: “Suicide”, “The Kiss” and “Cagney” were among the surprises of the evening. The first of the group, seen here on the right, set a great pace for the other two, quickly surpassing its low estimate of $6 million dollars and causing another bidding frenzy. The winning bid for this austere geometric was nearly double of the high estimate, selling for $16.3 million including buyer’s premium. 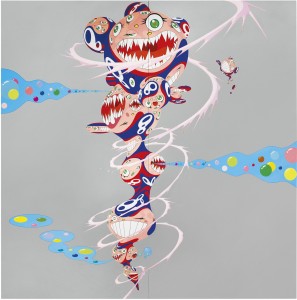 The room was filled with collectors, dealers and familiar faces. It was rumored that members of the Mughrabi family were in the front rows of the room, as were the members of the Monaco-based Nahmad clan. The first holds a vast collection of the Warhol’s work and the second is an art dealer dynasty known for its positions in the Modern and Contemporary Art markets.  Timothy Blum, the co-owner of the famous Blum and Poe gallery in Los Angeles departed following the unsuccessful Takashi Murakami sale. (Lot 43, “The Castle of Tin Tin”). The dealer represents the super star Japanese artist, who may be best known to the public for adorning a line of handbags and accessories for Louis Vuitton with his fierce-meets-cute cartoon characters.

Last night’s sale was the auction house’s most successful sale in its history, bringing in an impressive $375 million despite some unsold lots. The success was yet another confirmation of the strength of the contemporary art market segment as an alternative asset class as paintings by the masters of modern abstraction – Pollock, Rothko, Kline, Klein, Richter, all posted fantastic results. These works were fresh to the market, in some cases staying in the same collection for several decades, and Sotheby’s did well by introducing these lots in the beginning of the sale, setting the pace for the evening. More and more investors are adding to their collections not only for the aesthetic value these works bring to their collections, but also as a hedge against inflation, economic uncertainty and market volatility. Contemporary art has been a good performer for many investors and they are continuing to accumulate this asset class. 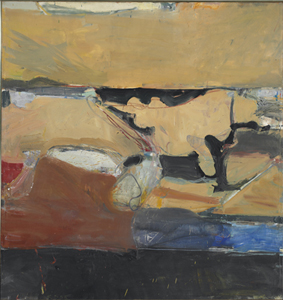 All eyes are now on the Christie’s Post War and Contemporary sale tonight! Some of the lots to look out for are the Untitled work by Robert Rauschenberg (lot #3), expected to comfortably exceed its estimate of $150,000 – $200,000; the two Agnes Martin canvases, the ‘Untitled #7’ and ‘Untitled #20’, both estimated to sell between $2 – $3 million; the signature, delineated, multi-layer ‘Ocean Park #48’ by Richard Diebenkorn estimated between  $8 – $12 million; another large abstraction by the superstar of the contemporary art market Gerhard Richter ‘Prag 1883’, and the curvo-linear Richard Serra COR-TEN 1984 sculpture ‘Schulhof’s Curve’.

The question now is whether the Sotheby’s sale has set a strong precedent for tonight’s sale at Christie’s. We are officially holding our breath!

Images Courtesy of Sotheby’s and Christie’s. All rights are property of their respective owners.