Morgan Miller’s “Art-X: What is Art?” premiers at Scope Miami

“Originality is nothing but judicious imitation”

One of our first interviews on galleryIntell was at The Armory Show in New York with Nicholas Logsdail, Director of the prominent London-based Lisson Gallery. We walked by and saw a triptych on paper. Red dots on a white background. Simple. Spencer Finch’s abstract work on paper captivated from the start. Simple, yet powerful, red dots of various intensity and hue clustered and dispersed across the surface held within them a deeper connection and we had to know what it was.  The work, it turned out was in direct reference to a 1650 Diego Velasquez painting of “Pope Innocent, X.” A virtual thread now connected two works of art some 350+ years apart, each created using the pictorial language and techniques prevalent and relevant to their times. Spencer Finch’s series of red abstract dots gradually gave up their abstract form and were suddenly imbued with concrete figurative imagery and 350 years of art history.

“Art-X: What is Art?” – Morgan Miller’s contemporary interpretations of well known and well recognized, often iconic works of art, are what every collector and art enthusiast already knows. Controversial or universally accepted, Miller’s images seem to refocus our attention on, at times, a previously unnoticed aspect of the original work he is referencing. Furthermore, there is a sense of familiarity in these works that makes the introductory process quite different and somehow less intimidating.

Bold, colorful and strong these images are certainly captivating on their own, but as you look closer you notice that every photograph in the series contains within it a deeper narrative.  They are, in fact a contemporary “translation” of a familiar story. 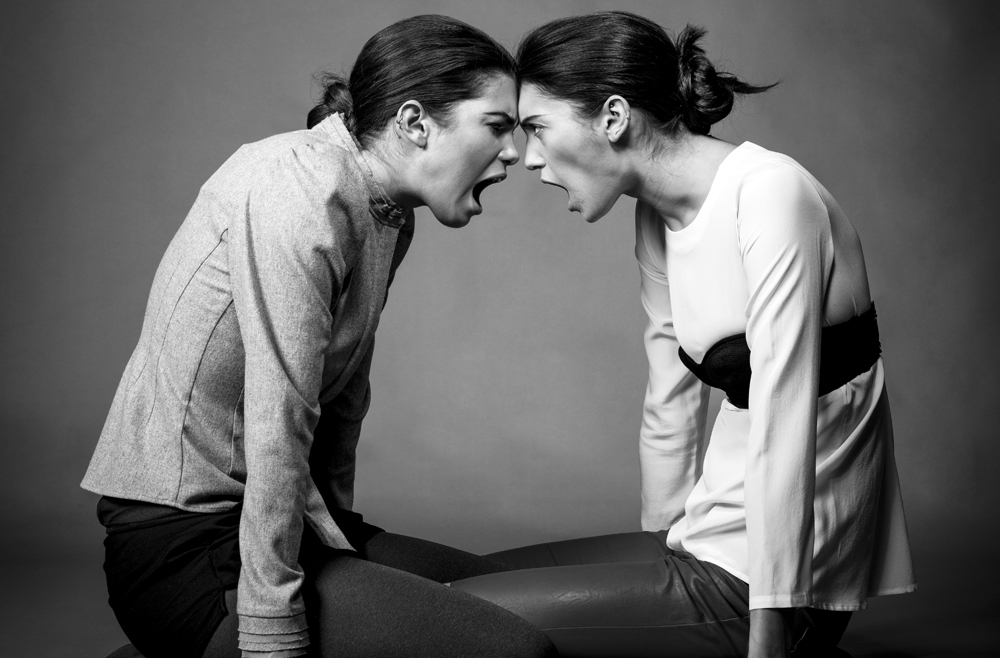 In some cases, like with Francis Bacon’s 1953 “Study after Velázquez’s Portrait of Pope Innocent X” reference, Miller’s contemporary image is, in effect the third reincarnation of the original Velasquez painting. Here the figure is seated in the same anonymous unanchored space as the Bacon and Velasquez portraits. Just like the Bacon painting there is an echo that is meant to communicate motion and sound, and even though the model is shown with her mouth shut, we can almost hear a scream trying to escape from within her. The perspective is largely retained from the two original works, complete with the Dorothy-esque red slippers and the ominous red carpet. The shift of sex in the portrait somehow makes the narrative louder, stronger, more direct and less …forgiving. It’s a curious transformation of intent, and one that manages to instigate a further examination of the two original portraits.

In another contemporary interpretation Miller has taken the famous 1917 Marcel Duchamp “Fountain” and gave it a unique new twist, once again, using tools and media relevant to the contemporary society. So, while Duchamp’s urinal was one of the first mass-produced items void of any personal mark of a craftsman, Morgan Miller likewise created his image using a medium format digital camera – the Leica S – a tool that allows for the production of multiples of the original image. So Duchamp’s “Fountain” in the hands of a contemporary photographer is being reincarnated as yet another form of the original “ready-mades.”

Perhaps the most striking and recognizable for the contemporary viewer, Miller’s Damien Hirst – inspired photographs, have the strongest potential of becoming the collectors’ favorites. This will likely happen for a couple for reasons. First, because the works they are referencing are ingrained in our collective memory as most scandalous and, therefore most memorable. And second, a vast amount of coverage has been allotted to both originals. The formaldehyde shark floating in a clear three-part tank, titled “The Physical Impossibility of Death in the Mind of Someone Living”, (yes, a painfully convoluted titled and yet another reference to Christian iconography of life, death and triptychs) was the subject of a wonderful and insightful examination of the contemporary art market. Don Thompson’s book “The 12 million dollar stuffed shark: The Curious Economics of Contemporary Art” is a favorite of art business courses across academia, so Miller’s well executed homage will be sure to resonate across all tiers of collectors.

The second “Hirst” image is just as recognizable. The original, titled “For the Love of God”, or simply “the skull” as most in the business call it, was produced in 2007 and consists of a platinum cast of an 18th-century human skull encrusted with 8,601 flawless diamonds, including a pear-shaped pink diamond located in the forehead that is known as the Skull Star Diamond. What made this work more infamous than famous however was its $100 million price tag, and the fact that it (factually) failed to sell at a public auction, held right at the peak of the 2008 financial meltdown. The exact sales trace for the work remains highly contested, with Hirst claiming successful sale at full asking price to a consortium that he himself belongs to, but unable to provide any proof of the transaction. 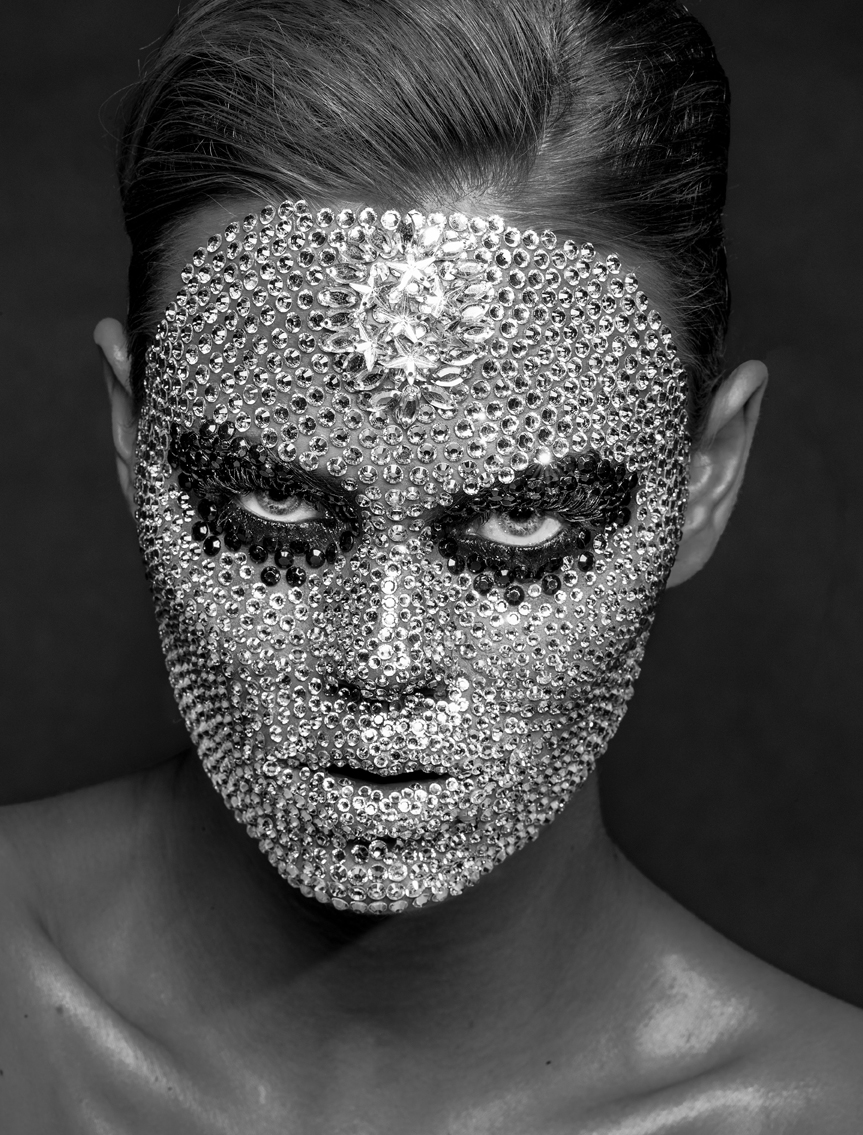 Miller’s own version of the flashy, over-the-top symbol of wealth and consumption, never mind the pseudo-religious title Hirst imposed on it, is even more striking. It’s immediate. The model’s intense gaze prevents you from sharing your attention with anything else in front of you. In Miller’s image, the inanimate object – the skull – once again gains a human perspective, animalistic force and intention. It even carries a stronger narrative than the Hirst original.

The first series, selected in 2012 by Leica for their S-Studio event and exhibition at Milk Studios and Leica blog, focused on the classic fashion photographs from the last century. Among the images Miller presented through the new perspective were the iconic Horst P. Horst photograph “Round the Clock”, Peter Lindbergh’s close-up of Mila Jovovich, Horst’s sensuously erotic “Mainbacher Corset”, famously animated in Madonna’s VOGUE video, Horst’s self portrait with a model in Izod swimware, shot on a Parisian rooftop, and more. Ten in all. The current series also features new visions of works by Marina Abramovich, Dan Flavin, Cindy Sherman and Tracy Emin.

The concept for the 2013 series was developed in collaboration between Morgan Miller and Matt Riva with the support of Katerina Simonova, Chief Editor of Creem Magazine. It will premier in the magazine’s 10th edition during the Scope art fair in Miami Beach. Morgan Miller is also Leica’s featured photographer for their unique medium format S-System.