Matt Black looks at the invisible 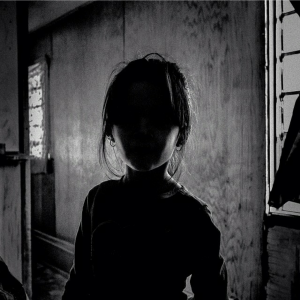 Photographer Matt Black has 182,000 followers on Instagram (@mattblack_blackmatt). One hundred and eighty two thousand people see the photographs he takes with his point-and-shoot camera, photographs of people living at or below the poverty line. According to MSNBC, fully 45 million people living in the US “meet the official guidelines for poverty. And that doesn’t include millions more who are among the working poor – those who tip-toe just above the government’s official poverty line, which for a family of four means an annual income of less than $23,850 and for an individual means an annual income of $11,670.” In NYC this could easily be a monthly rent for a three-bedroom apartment. 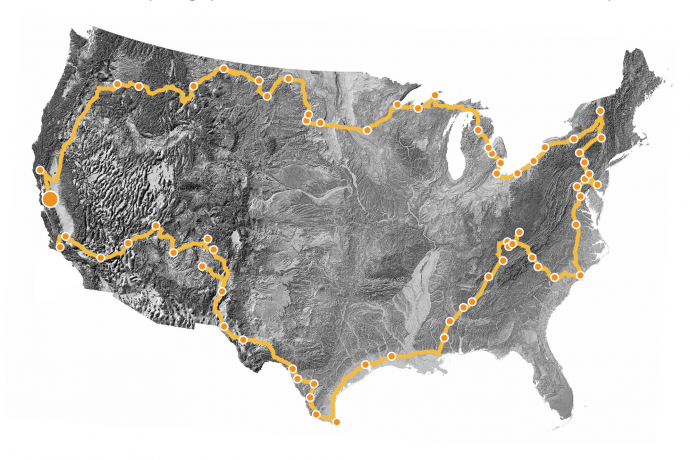 Map of 70 cities part of the joint project with MSNBC

What sets this project apart is scope. As you navigate from page to page, and from one geographic location to the next, you begin to understand not just the distribution of poverty, but also the underlaying economic and socio-political causes that influence migration. In some areas poverty has become the final diagnosis, one that entire generations are unable to escape. Flint, MI is one such “diagnosis”, as well as a vast stretch of land along the Mississippi River referred to as “Cancer Alley.”

This caption accompanies the Instagram post of the photograph above on the right: “I’ve been through hell and damnation.” A resident of the Press Park neighborhood in the Upper Ninth ward of New Orleans is diagnosed with stage four cancer. Called the “Black Love Canal,” the housing development was built on a reclaimed landfill in the late 1970s. High levels of dioxins, lead, arsenic, and other chemicals in the soil led to the neighborhood being declared a Superfund site, although some residents remain. “I just ask God for strength.”

Orange dots on the graphics below tell you the name of the chemical/petroleum company’s plant. We picked Shell as an example, but as you can see there are many more, including DuPont, Motive, CF, Vulcan Minerals, Lion Copolymer, Mosaic, Total Petrochemicals, and others. As you keep checking the boxes on the right: Displacement, Emissions and Poverty, you get a terrifying overlay of conditions that illustrate the causality of environmental and economic conditions on health and poverty rates. 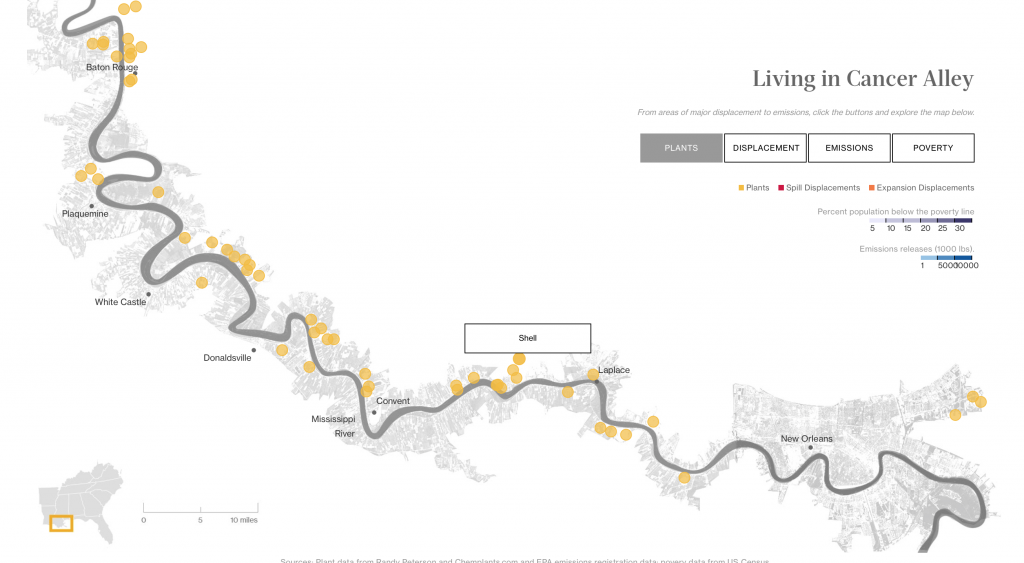 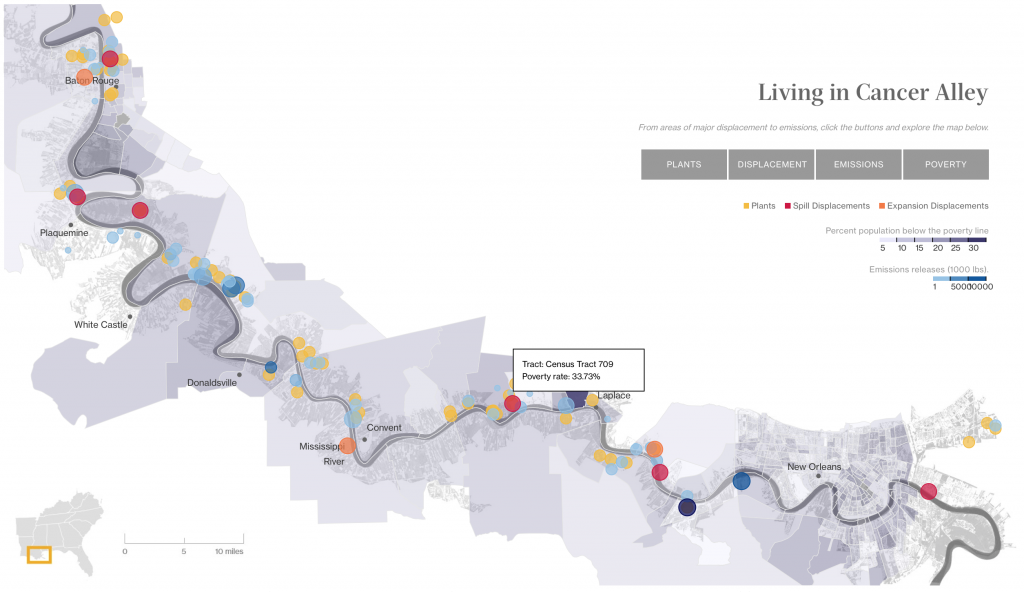 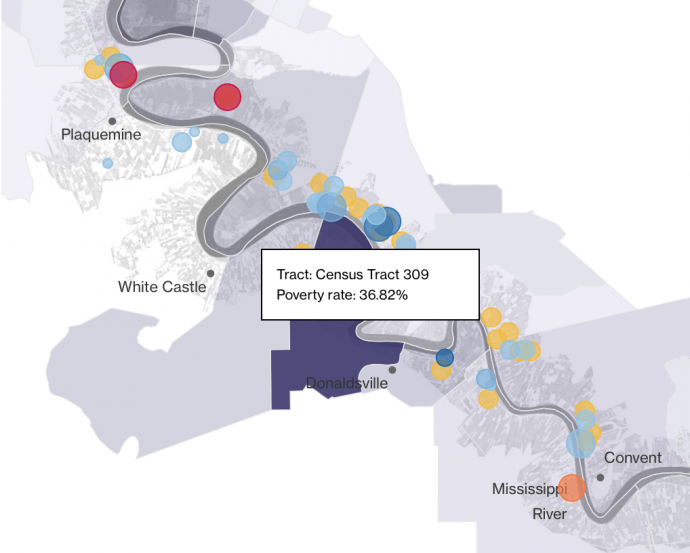 Regardless of the framing, situation and location Matt Black’s photographs share one commonality: they are all portraits. Each one is an intimate portrait of lives, habitats, women, children, young and old men, their realities, their lives and hopes. Some images are reticent, some are full of sound, some are posed, while others are incidental and transient in time and space. What you see in Black’s portraits is determination, humbleness and resolve. What you don’t see is defeat. “I think it’s the optimism of immigration, the new immigrant, it’s a contest between that and the reality they face. Is the power of the dreams that people bring with them enough for them to overcome the realities that they face in these communities?”- Matt Black.

And while we have been soaked with images of despair, from the Haitian earthquake to environmental struggles in Africa and Asia, to the chaos that is the refugee march through Europe, Black’s photographs manage to seize you whole. Each frame permeates with urgency and you feel the gravity of their lives. I don’t say suffering, I say gravity, because their lives feel weighted with labor, with struggle, with necessity to survive. Think Sebastiao Salgado less the vast polished grandeur of vistas. And while Salgado’s photographs show this wide global arch, Black’s portraits are not of “nations and issues” they are of a specific person living in a specific place dealing with a specific hardship. There is no observing from above or from a distance. The place is right here and the child is right in front of you. You have to see it. 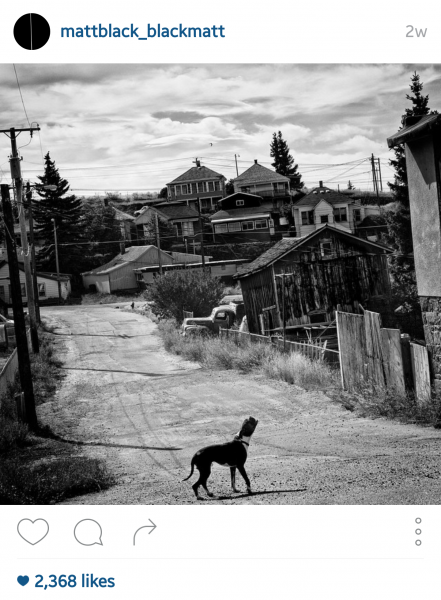 Matt Black is a photographer from California’s Central Valley. His work has explored themes of migration, farming, poverty and the environment in his native rural California and in southern Mexico. Recent photo essays have been published in The New Yorker, Mother Jones, and Vice Magazines.

He was named Time Magazine’s Instagram photographer of the year in 2014 and is a contributor to the @everydayusa photographers’ collective. He has produced short films and multimedia pieces for msnbc.com, Orion Magazine, and The New Yorker, and has taught photography with the Foundry Photojournalism Workshops and the Los Angeles Center of Photography. Anastasia Photo gallery in New York represents his fine prints. He is a nominee to Magnum Photos.

His work has been profiled by National Geographic, The New York Times, National Public Radio, Time and Slate, and has been honored by the Robert F. Kennedy Memorial Foundation, the Magnum Foundation Emergency Fund, World Press Photo, the Pulitzer Center on Crisis Reporting, Pictures of the Year International, the Alexia Foundation, and the Center for Cultural Innovation, among others. He lives in Exeter, a small town in California’s Central Valley.

You can see an installation of his most recent photographs at Anastasia Photo on the Lower East Side of Manhattan through the end of October, 2015. Geography of Poverty is a joint project between Matt Black and MSNBC.

All images featured in this article © Matt Black.