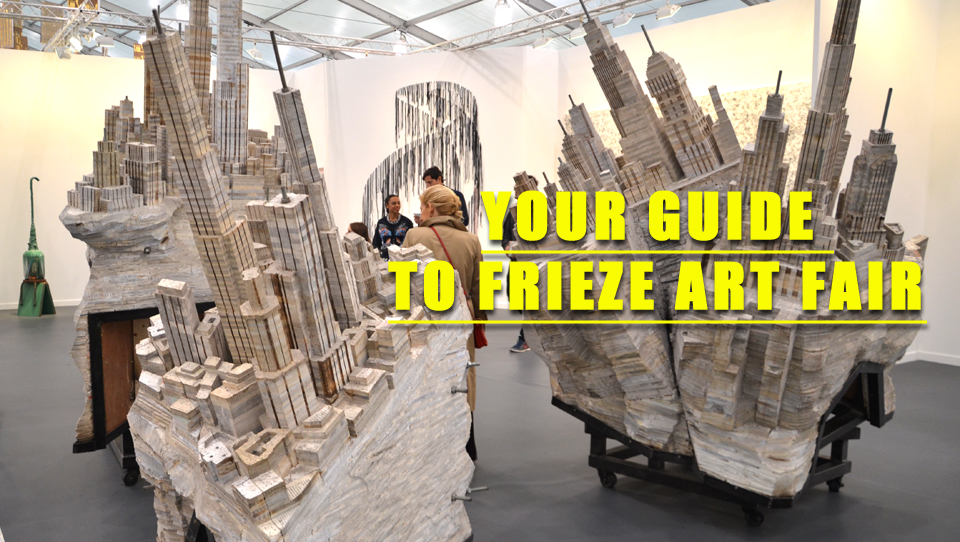 Your guide to Frieze Art Fair

The big white tent on Randall’s Island is once again home to a contemporary “anchor” art fair and we have braved the fog, rain and the all-but-impossible transportation options to get to the Frieze Art Fair and see what the participating galleries are showing this year. It is, much like the previous year, a mixed fair. Some galleries showed engaging intelligent works, that encouraged you to interact with them, while some resembled hesitant art school projects yearning for a grade. And for the commute that felt more like an obstacle course, plus the $51 admission (if you buy at the door) I feel the fair should have been a sure-fire blockbuster rather than an exercise in endurance under the Triboro Bridge.

In all, the selection of galleries was a break from the “usual suspects” allowing for an element of surprise rather than the expectation of the reiteration of the familiar vistas. So, with the expected staples like Kapoor, Saraceno and Warhol (Tanya Bonakdar brought a small hovering Untitled sculpture by the Berlin-based Saraceno to the fair, and I counted three Anish Kapoor multi-colored half-spheres at three separate booths) out of the way there is finally a chance to see something fresh, something new, something you feel is just making its first introduction.

The fair’s website conveniently lists most of the works shown at the fair in case you chose to buy from the comfort of your own laptop and I strongly recommend taking the virtual tour and making notes on the things you like. In the meantime, here are some things that fought my attention.

We featured Liu’s marble sculptures at David Zwirner Gallery’s booth during The Armory Show but the works shown by Lehman Maupin are actually created from books. This was really one of the absolute highlights of the fair, so make sure you see them in person. 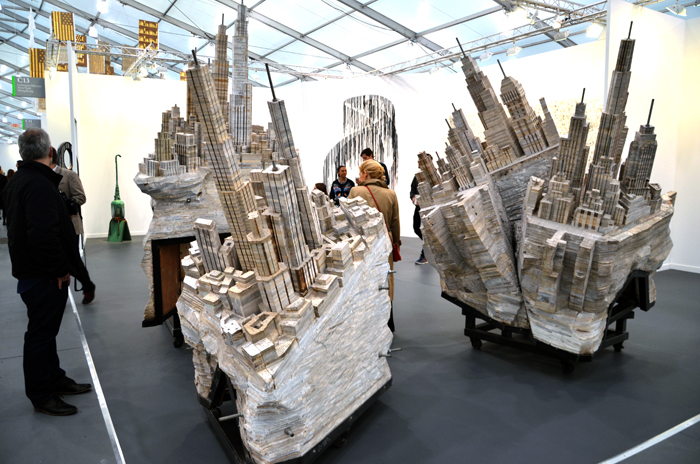 It took me a while to recognize the form and it wasn’t until I walked around the sculpture several times that the shape of a kneeling man became apparent. It’s a deeply emotional work made in 2013 in an edition of five.

This is a series of 11 black painted canvases mounted on plywood walls. In a steady progression the canvases contain the same figurative image that grows more and more abstracted as you move from right to left. Rirkrit Tiravanija, a professor at Columbia University, used chalk to create his images and because the panels are positioned so close to one another anytime someone walked through the apertures between them they inadvertently smudged and smeared the charm. With a sleeve, with a purse, with a hand. I am not sure whether this interaction was the artist’s intention, but it certainly made the experience that much more interesting. You, as a spectator, suddenly contributed to the work. The canvases are too large and the space is too narrow to make our anything in the way of composition, but I think the main objective of the installation was to engage the viewer, and Tiravanija achieved the task splendidly. 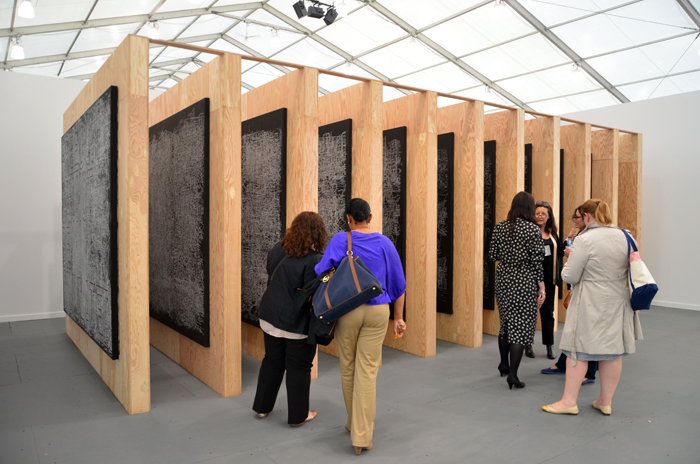 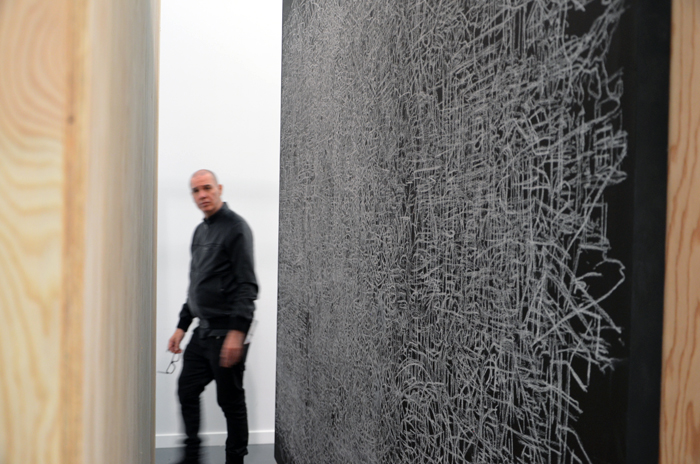 Did I say that Kapoor was an “expected staple” at art fairs? Well, that’s a fact nowadays. Just think back to any of the recent art fairs and you will recall at least 4-5 of these half-domes at each major fair and it’s usually the same galleries that bring them. Each small Untitled work costs about £325,000 or half a million USD. The large versions run close to a $1 million. They range from matte graphite gray, to gold, to a pearlescent burgundy, to white and all other possible colors and are a hypnotic experience for any viewer. This and the super star name attached to the work, certainly make them a hot commodity among collectors. Lisson Gallery typically sells (or maybe even pre-sells) theirs within the first hours of the VIP preview. 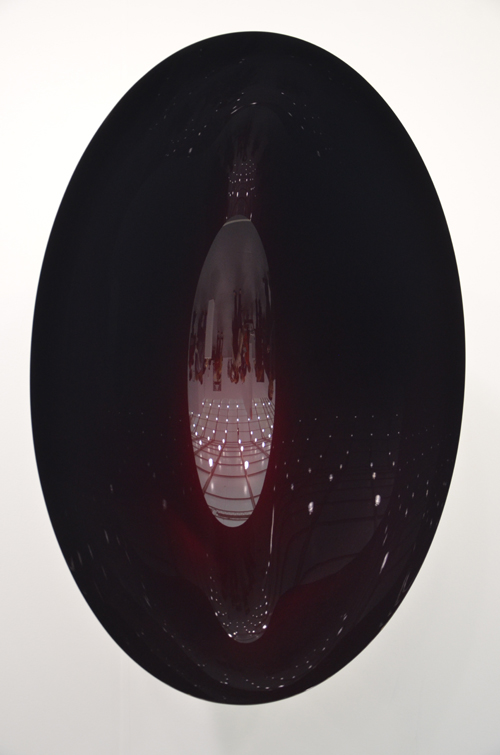 Hein’s Corner Wall, or more precisely its positioning in relationship to the walls reminded me of Richard Serra’s recent works at Gagosian Gallery. 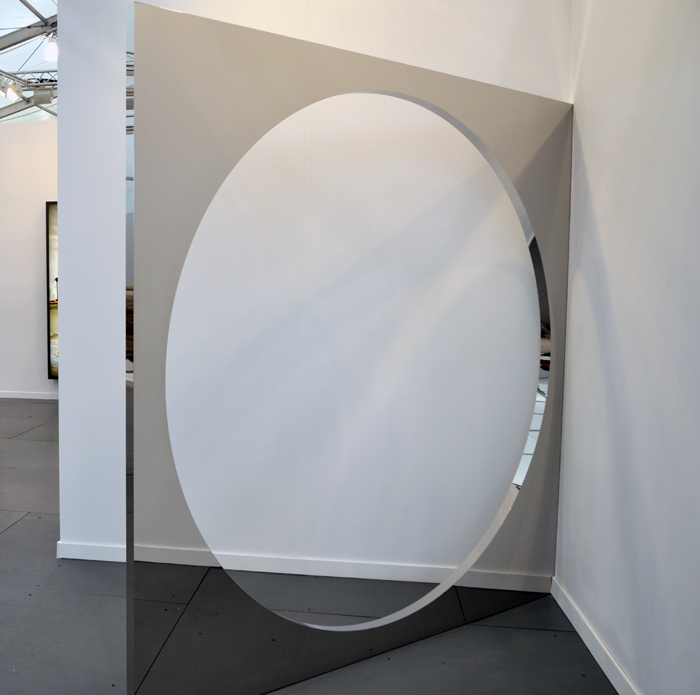 There is just a wonderful sense of lightness and humor in this work. In October the artist performed with Kim Gordon during Frieze Art Week in London. Graham represented Canada at the 1997 Venice Biennale. 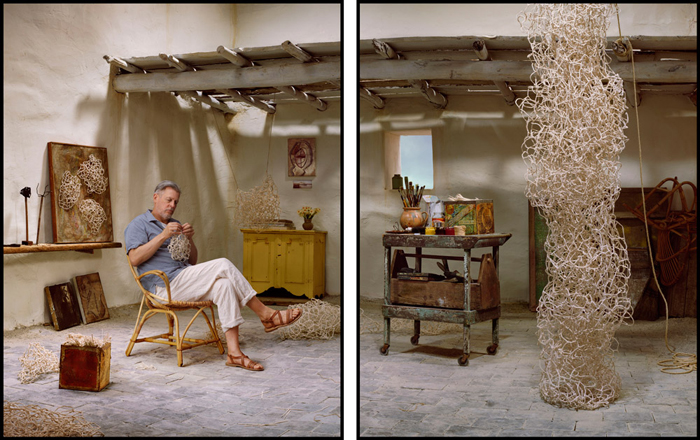