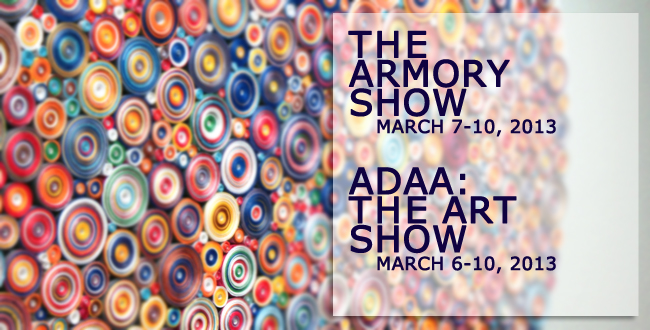 You can’t see everything – but you should see this!

It’s just days before the launch of the 2013 New York art fair season and Chelsea streets are a Tetris puzzle of movers’, trucks, and crates, all on their way to the West Side Piers and the Park Avenue Armory for the annual Armory Show and the ADAA: The Art Show. It’s truly an exciting time to be in New York as art collectors are ready to hunt and important deals deals are about to be made. It’s really about being in the right place at the right time to get the piece you’re been searching for or discovering something new and amazing!

It can also be somewhat daunting, after all it’s estimated that more than 500 galleries from around the world will show more than 6,000 artworks in the next 7 days; and with more than 20 art fairs in one city you really need a guide!

galleryIntell has put together a list of top ten must-see galleries at the two principal art fairs: The Armory Show at Piers 92 & 92 and the ADAA: The Art Show at the 67th street Armory. The Armory Show (not to be mistaken with the historic 1913 International Exhibition of Modern Art, often referred to as The Armory Show) is the biggest of the fairs this month with more than 200 galleries exhibiting on two piers. Modern Art galleries are located upstairs on Pier 92 and Contemporary galleries take up Pier 94. The ADAA: The Art Show is uptown at the 67th street Armory on Park Avenue – a historic building with cavernous halls, the fair features only members of the prestigious ADAA – Art Dealers Association of America – 71 galleries in all. Although the fair is much smaller than its West side counterpart the show is an important and valuable source for top-tier art by blue chip galleries.

So see these galleries first and then wander around and explore the rest.

Marianne Boesky Gallery will show two semi-self-portraits by a Russian-born artist Kon Trubkovich. Kon’s work is a unique take on the all-familiar VHS stills: worn-out yet recognizable images from the not-so-distant past.

Morgan Lehman Gallery is focusing their inaugural booth at The Armory Show on the seismic and beautifully layered installation by Kysa Johnson. A continuation of Kysa’s gallery exhibition Empire Loop, the Armory installation is an exquisite amalgamation of Piranese’s Ruins, sub-atomic particle decay paths and the Bank of America waiting room. Intrigued? Watch our interview with Sally Morgan Lehman, Director of the Morgan Lehman Gallery to find our more.

McCormick Gallery will show a selection of abstract expressionists including the works of Mary Abbot, a spectacular lesser-known AbEx master “whose lineage traces back to John Adams, the second president of the United States.”

Yancey Richardson Gallery, here we recommend works by Sharon Core, Laura Latinsky, and make sure you see striking photographs by a South-African photographer  Zanele Muholi (the gallery is hosting the artist’s solo exhibition in conjunctions with The Armory Show).

We are also looking forward to seeing what Lisson Gallery will be showing this year. Watch our interview with the gallery during last year’s fair.

Acquavella Gallery is showing a wonderfully tactile and sensual work by Lucian Freud, a mobile by Alexander Calder and Willem deKooning.

David Zwirner Gallery will be showing on the works of the American artist Milton Avery. Executed in the 1930s, the paintings feature circus scenes or vaudeville performances, and include wild animal tamers, trapeze artists, strippers, and sideshows. The gallery recently celebrated its 20th anniversary with an inaugural exhibition of works by Donald Judd and Dan Flavin.

Lawrence Miller Gallery showing a series of wonderful photographic plates by a pioneer of photography and a preamble to cinema Eadweard Muybridge. The gallery has also produced a short video on Muybridge’s plates.

Yossi Milo Gallery – will highlight the work of gallery artists: Alison Rossiter, Matthew Brandt. Both are innovators in the field of photography and photographic manipulation.

Take this guide with you, enjoy all the wonderful art around you, and most importantly, have a great time!

Images courtesy of the galleries.