Rebeccah Blum: We are standing in front of some drawings by a young German artist, Jorinde Voigt. She was a cellist until her later teen years and certainly you can see the influences of music in her work and as far as I know she considers her drawings to be a some kind of a notation or score for physical experiences and they have a spacial quality to them.

These particular drawings come from a series called Peace for Words and Views. She recorded her experiences while reading a book by French philosopher named Roland Barthes, and what she’s done in these drawings is she included collaged elements that are visualizations of certain words that she read in a book and then in a systematic way she recorded which part of the book she read it in. A lot of her work has kind of systematic quality to it, counting up or counting down wether or not it’s a fictive kind of systematization such as declensions in time – yesterday, today, tomorrow, one minute, two minutes, three minutes, four minutes. That’s her way of depicting certain parameter that she experiences while she’s doing something like reading this book. 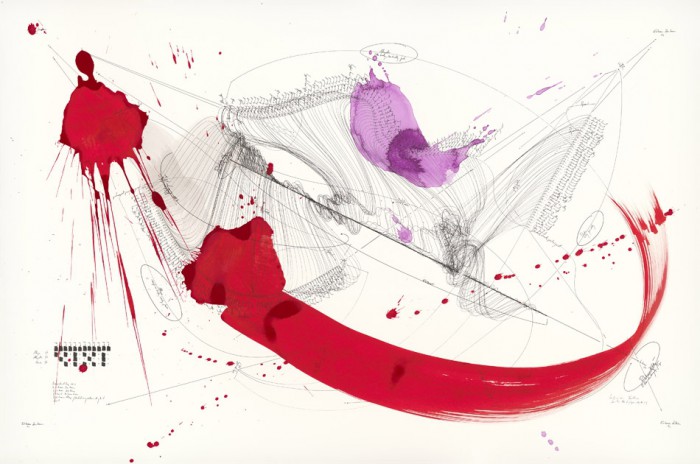 So she’ll have these collaged elements that have the page number on it, for example here is says “spule” which means spool, like a spool of thread and then around it she included drawings that have elements of time and physical phenomena like wind direction, light, electricity, north and south, internal and external centers. She often repeats an image in this drawings because she’s showing the imagine not just from one point of view but from other perspectives as well. This repetition of one image in her drawings gives it sort of a musical quality because there is a rhythmic element to it.

But it’s not just a systematic notation of her experience, there is also a poetic interpretation. You see elements that you recognize perhaps as a score but they’ve been almost unfretted, so she’s deconstructing and reconstructing her experience. One other thing that’s really clear in most of her drawings, and that shows her con-systematic nature, is that she’ll have in the title of the work she’ll include every element that she’d included in the drawing listed here. So in the end you can actually look for these elements and it’s a way, I guess, for her to keep track of what’s important to her in that one drawing.

She travels a lot, and when she is in another countries she often takes elements from their culture, for example their paper or she’s interested in their alphabet and, I think, she developed her own kind of visual alphabet and language, and it comes out in her particular style of drawing and also including certain elements.