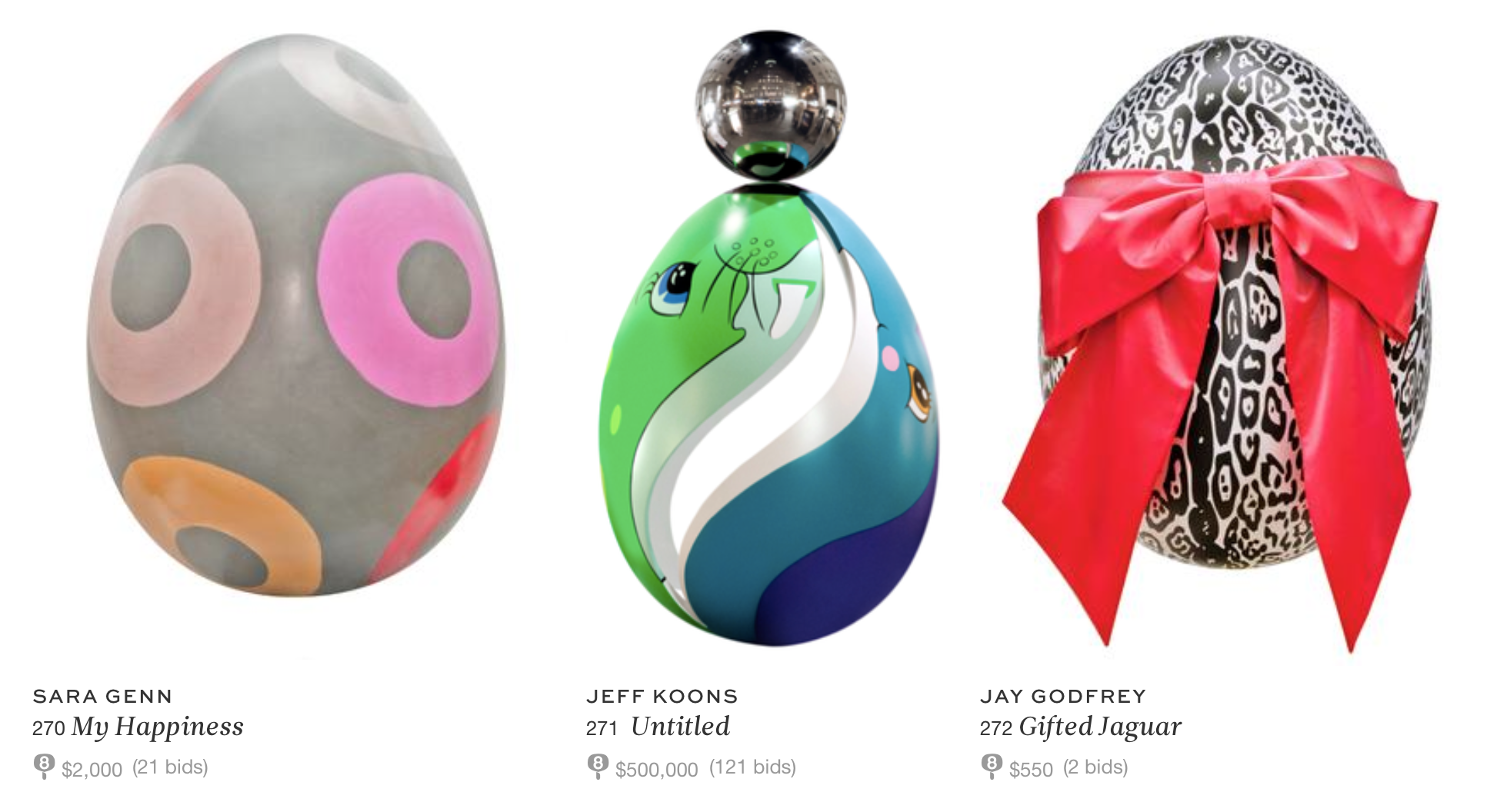 For the past several weeks I turned into a eager 5-year-old running around Manhattan, looking for one of the 260 gorgeous Faberge eggs, part of the The Big Egg Hunt NY #TheBigEggHuntNY initiative designed to benefit two important charities. The eggs, designed by some well-known and some not so famous artists, fashion designers, architectural firms, and sponsored by local and international art galleries (Waterhouse & Dodd, Leila Heller Gallery), fashion houses, companies and individuals ranged from transcendently beautiful and inspired to, well, better-luck-next-time, as in the case of Julian Schnabel‘s hurried double stroke, either done in his sleep or by some vengeful former assistant.  Those who poured their hearts into creating these breathtaking sculptures will surely feel the full reward of their efforts when all 260 eggs auction off during a live  auction on April 26th.

Jeff Koons‘ seal with a chrome ball (officially its Untitled) is still the most expensive egg of the auction. At this point, the egg has generated $500,000 with 121 bids and the price is expect to reach $1 million once the work is offered at a live auction on April 26th. Koons wrote this about his egg: “When asked to create an artwork based on the egg for Elephant Family and Studio in a School, I immediately thought to incorporate a gazing ball into the work. The egg has been opened up in the center, making reference to modernist sculptures, which generally used the egg shape to refer to a family unit. As its base, we have the yin and yang, the masculine and feminine qualities of the animated seal and walrus, along with the sense of the family unit. The work displays enjoyment of both profound internalizing along with the experience of external vastness.” This may be the priciest one of the lot, but with four days to go, some of the eggs, like Jay Godfrey‘s Gifted Jaguar egg with a luscious red bow tied around its perimeter, are still at a very affordable $550. 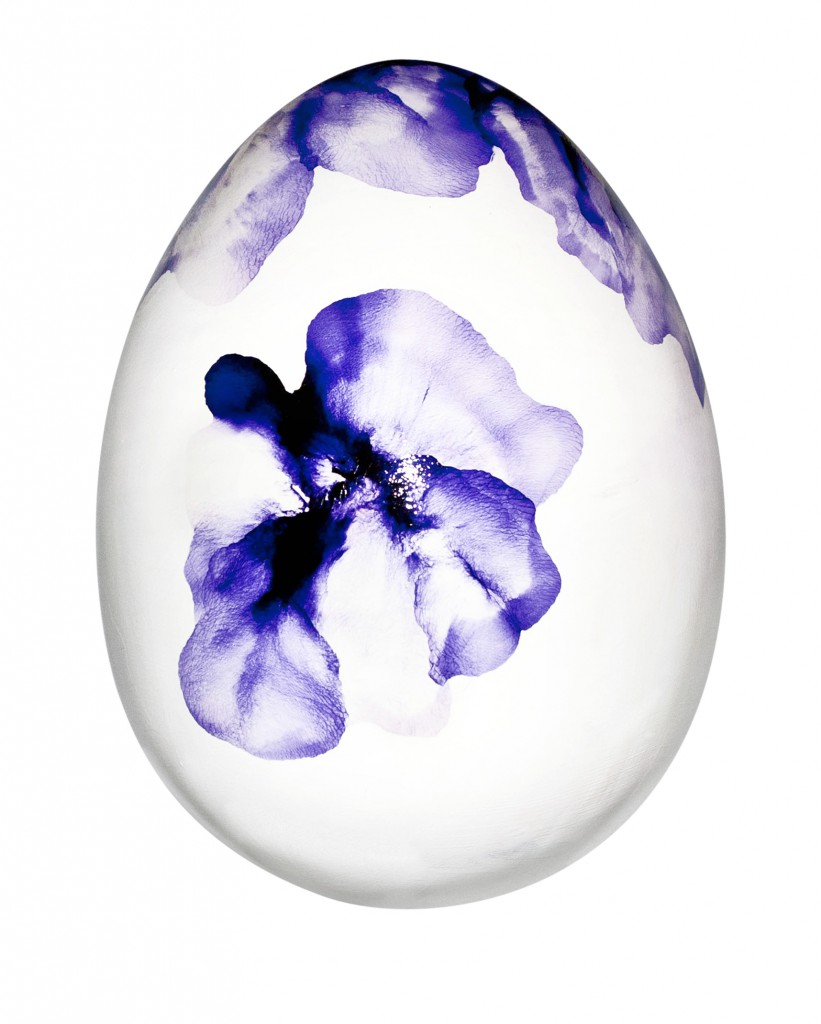 Antonio Murado‘s petal-soft Leela, 2014 (one of my favorite eggs, displayed near the NASDAQ building in Battery Park City) is at an average $7,500. Murado: “Flowers are universally used as motives for decorating objects, being symbols of beauty, but also fragility and promise of decay. Their colors and soft shapes invite the exterior world to get inside them to perpetuate life. The egg stands for fertility but its tremendous structural strength and spartan decoration are to offer the life inside protection from the world outside into which it will blossom.”

There were some completely unexpected interpretations and variations on the theme, including Joana Vasconcelos‘ cake-like handmade woolen crochet, ornaments, polyester on fiberglass egg titled Candy Egg that drew 40 bids and is currently at  $7,000. Zaha Hadid‘s futuristic spike-laden Liquid Skyline reached $37,000 with the egg now transferred to a live auction. Not much of an explanation, but here it is:” Liquid Skyline investigates the relation between natural form and urban fabric, resulting in a fluid and unexpected skyline.” And of course Carter Jones‘ edible chocolate egg created in collaboration with the famous french chocolatier Jacques Torres. 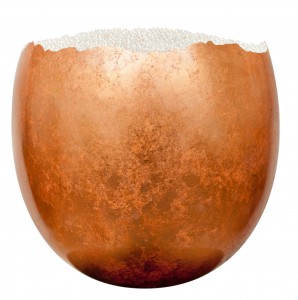 Jonathan Scholoss‘ A Pearl Taken Aback STUN-NING, iridescent copper and plastic pearl cracked egg is currently being sold for $3,400. The online portion of the auction will end today, April 22nd at noon, EST at which point bidding for some of the eggs will be transferred to a live auction at 7pm. Here is a short quote from the artist on his creation: “One of the most famous eggs in history hangs in the background of Piero della Francesca’s altarpiece in Milan. I believe this egg-shaped object is a rare and beautiful, giant pearl. Filled with thousands of pearls, the copper egg is as rare as Piero’s pearl. Take a pearl for yourself – like the egg, a symbol of life.” 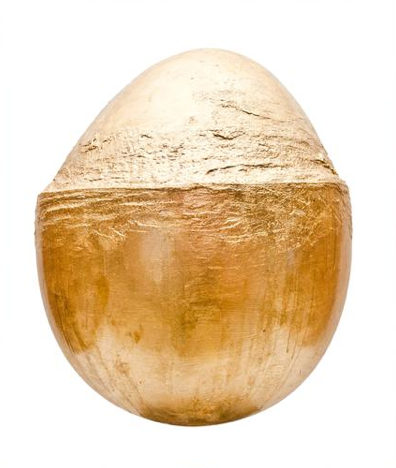 Some of the eggs, like Jane Morgan‘s The Golden Lincoln Cent Egg, weighing somewhat more than a penny, has been a favorite among the egg hunters drawing 51 bids and currently selling for $15,000. If you want to take this one home you have 4 more days to gather up your own pennies.

Here are some of the other “egg-lights” we recommend you see in NY and, if you can, buy a dozen to support two important raising money for children in NYC through Studio in a School, and conservation efforts through Elephant Family. Sponsored by Fabergé, the event is 100% charitable.

Perez: The “Fucked up Golden Egg” is about dreams and the reality of those dreams. Sometimes the dream is but imperfect. You found the golden egg, may not be exactly what you thought it would, still you found it. Still not bad.”

“The work, both physical and virtual, is inspired by the challenges and opportunities of the 21st century, and is meant to provide a cartographic example of ‘whole-systems thinking,’ a visual framework for our collective effort in realizing a just and sustainable future.”

“I chose to envelope the egg in hand-hammered sheet steel because it best illustrates the dichotomy of the material. By creating a “patchwork” the rusted, hammered and riveted steel gives the appearance of a pieced and stitched fabric or quilt. Simultaneously, the metal shroud armors the egg and its contents, protecting it and mystifying what’s inside.” 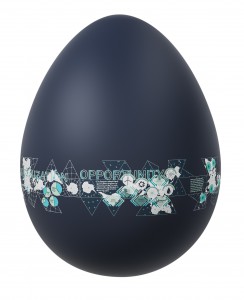 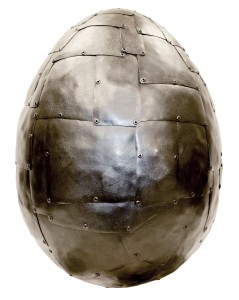