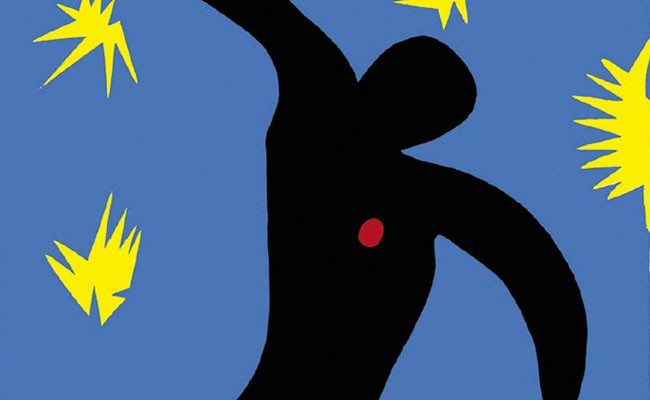 Trust Henri Matisse to have a unique approach to well-known narratives of the Greek myths.

Best known as the driving force of Fauvism towards the end of his career Henri Matisse produced an equal number of cut-out “paintings” that are known for their rigid lines, richly saturated colors and dynamic compositions. Icarus, or The Flight of Icarus (click on the detail to see the full image) is perhaps his best known work from the book of cutouts titled Jazz.

Icarus was a protagonist of a well-known Greek myth that was quite popular among European painters as a subject. The story goes that a young man named Icarus was obsessed with the idea of flying. Determined to raise to the skies and fulfill his dream he constructed beautiful wings made from wax. Happily he ascended, gliding through skies, going higher and higher. His father warned him again and again not to get too close to the sun, but Icarus discarded all warnings and one day headed straight up towards the bright light of the sun. The heat melted the wax and Icarus plunged to his death.

Here Matisse shows Icarus flailing in the deep blue sky, his body in free fall. It’s a deeply tragic moment of inevitable death, of destruction, of collapse of hopes and ambitions, yet Matisse creates an almost meditational composition. The bursts of the yellow sunlight against the rich blue of the sky are almost hypnotic. His Icarus with a bright red spot in place of a heart is mysterious and calm, free of anxiety or fear. This beautiful, bold color could be interpreted as Matisse’s way of depicting Icarus’ passion for flying! Towards the later part of his life, Matisse, almost blind and no longer able to paint using traditional means, resorted to “painting with scissors”. Jazz was a compilation of hundreds of paper cutouts (like Icarus). Images from his book entered popular culture seamlessly, and have been reproduced as posters and prints.