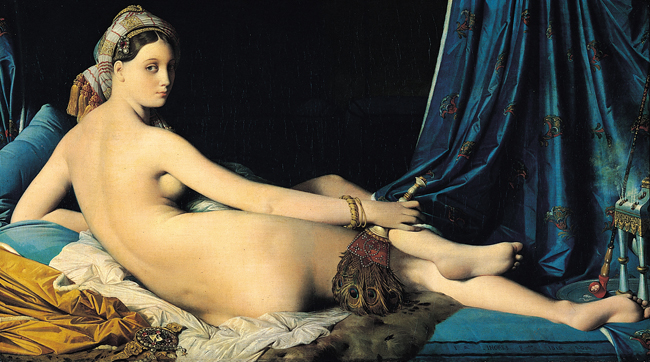 “The beautiful is always bizarre.”

Next to the portrait of Napoleon Bonaparte – Napoleon I on his Imperial Throne Jean-Auguste-Dominique Ingres‘ Grande Odalisque is widely considered to be the artist’s best-recognized work. The masterpiece was created on commission by the Neapolitan Royal Family. Ingres initially traveled to Naples in early 1814 to paint Queen Caroline Murat – Napoleon’s sister, and the Murat family ordered additional portraits as well as three smaller scaled works: The Betrothal of Raphael, La Grande Odalisque, and Paolo and Francesca.

The curators at the Louvre Museum in Paris believe that the Grande Odalisque “was probably a matching piece to another nude, La Dormeuse de Naples, destroyed in 1815.” Due largely to historical events that influenced the social and financial standing of the royal family Ingres never received payment for the Odalisque or any of the other paintings he completed with the exception of The Betrothal of Raphael.

When the Grande Odalisque was exhibited at the 1819 Paris Salon, critics considered the anatomical distortions (look at the figure’s elongated spine) both extravagant and odd and the Turkish accessories out of fashion. The exhibition of La Grande Odalisque at the Salon of 1819 confirmed that the critics didn’t accept or even understand Ingres’s forward-looking style. They criticized him for disregarding anatomical reality, which set him apart from his teacher, Jacques Louis David (1748-1825). The painting did not receive the admiration it deserved until it was re-exhibited in 1846 and 1855. By then, writers such as Baudelaire recognized that the bizarre was an essential component of Ingres’s aesthetic: “The beautiful is always bizarre.”