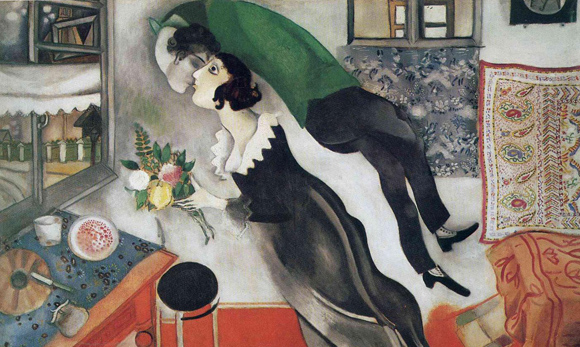 It’s her birthday and in a moment of emotion and passion, her husband decides that the flowers he got for her are not enough. And so, he literally ‘leaps’ to kiss her, catching her by a wonderful surprise and carrying her away.

“The Birthday” or “Anniversary” as it’s also known, is a 1915 Marc Chagall composition featuring a simple interior typical of Russian provincial tastes of the turn of the 20th century. The two figures, a man and a woman appear to be free of having to conform to the common laws of physics. They simply float, unburdened by gravity. The woman in the painting is none other than Chagalls’ beloved first wife Bella Rosenfeld whom the artist met in St. Petersburg in 1908. Bella, in a simple black dress is shown tilted forward towards the window as if running, holding a festive bouquet of flowers. Chagall – floating lovingly above her, kissing her with his head bent and twisted, his torso turned away from her. This is an intimate setting, meant for the loved one, and that’s how the viewer gets a feeling of being in the same room as the couple and almost intruding upon an intimate moment. Like so many of Marc Chagall’s other loving tributes to his wife, this painting is filled with intimacy, caring affection, love and warmth.

In his autobiography “My Life,” Chagall described his first encounter with Bella: “Her silence is mine, her eyes mine. It is as if she knows everything about my childhood, my present, my future, as if she can see right through me.”

The color palette is interesting for a different reason. The primary colors in this painting are red, black, white and green – the principal colors used by Kazemir Malevich, the Suprematists and abstractionists of VHUTEMAS. It was the preferred palette for the new century, the new language of Russian modernism.

Chagall’s dynamic career included theater sets, stained glass, the two magnificent paintings at the Metropolitan Opera in New York, fairytale illustrations, Biblical interpretations and so much more. “His images from his long and full life (1887-1985) depict the world’s transition from ancient to modern like the most beautiful epic poem.”

The painting is in the permanent collection of the Museum of Modern Art in New York.