What do you say when you see a classic photograph by Edward Weston, that is historically relevant and also see the original price tag of $20 on it? A price that is nowhere close to its current market value. Well, you say, great work, wish I had bought it in 1936! We spoke with Bruce Silverstein, founder of The Bruce Silverstein gallery in New York about these iconic photographs he exhibited at The Armory Show.

Bruce Silverstein: My name is Bruce Silverstein, I’m with Bruce Silverstein Gallery in New York. We are at The Armory Show at Pier 94 and I’m going to be talking about a work by Edward Weston. This is a photograph that Edward Weston did in 1936 and it’s called ‘Dunes Oceano‘. It is an image from a series of dunes that he did during that time that are considered some of the most important works by Weston. Weston is an American Modernist photographer. 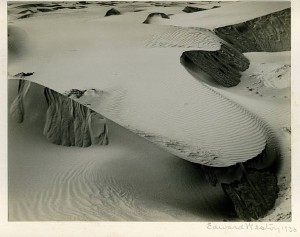 The image is particularly interesting as there is a certain optical play that plays with one’s senses – when you look at the image it’s difficult to tell what’s in the background and what’s in the foreground. You have this beautiful line here that is formed from the light hitting the surface and it is dark down here. It’s a very subtle rhythmic image. 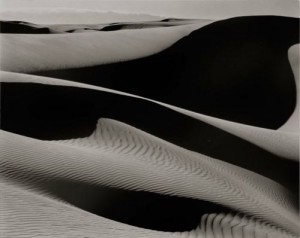 Beyond the photograph, it is also a very important object. These photographs were often not respected by people at the time so they were often not in a great condition. This one was mounted and signed by the artist, clearly this is something that he treasured, and it has been really well preserved. 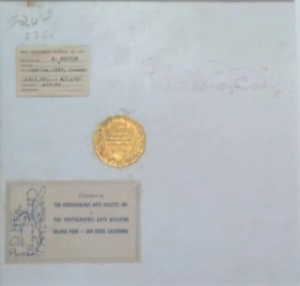 Something that I will show you – that’s quite interesting – is on the back of the print. You will find some very interesting information. It shows the title of the work by the artist, [the fact that] it was exhibited in 1936 at SFMOMA, there are some stamps from various camera clubs, exhibitions that the piece was in, and here, you have the price tag in 1936, which is $20. Only a few people were smart enough to buy it back then at that price!